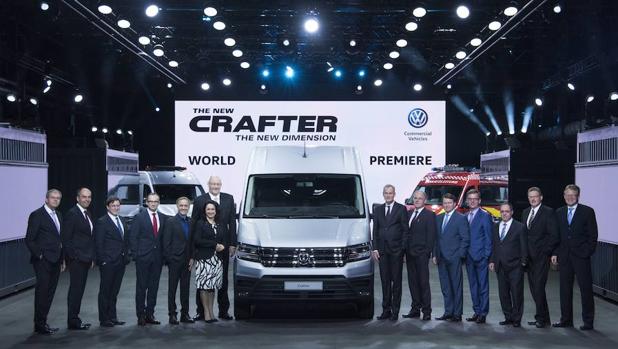 VW Raises its capacity with the new Crafter

Volkswagen Commercial Vehicles maintains good results in 2017 in the first quarter of 2016. The new Crafter, of its own development, raises orders by 60 percent in the first three months of 2017. The brand registered in 2016 the highest growth of its Segment, considerably increasing its market share.

Volkswagen Commercial Vehicles is considered within the VW group as an independent brand, at the same level as Audi, Seat or Skoda. The test is the entry into operation of a modern Polish factory in Wrzesnia, with an installed capacity of no less than 100,000 units per year and which will produce the new VW Crafter and its clone TGE signed by Man. , With 80,000 units of Crafter and 20,000 for the TGE.

In the first quarter of 2017 the commercial registrations reached 4,186 units, 7% more than in 2016, reason why in 2017 it is possible to surpass the 20,000 vehicles, supported also by the new Crafter, with which it is expected Double the previous sales in the medium term. All these calculations are done in a total market that has risen 25 percent in the first quarter. The other VW Commercial models are also experiencing significant increases, which has led the brand to a growth in orders and deliveries of 60 percent.

Total market for commercial vehicles on the rise

The brand aims to expand into a 360 degree approach, attacking very interesting market share. Individuals and the outdoors, with the outdoor versions, are registering an ample demand of clients that arrive from the market of cars, SUVs or minivans.

Versions of T6 and Caddy generously equipped for families is another portion that the brand considers, just like the world of the Caddy with natural gas powered. The transport of parcels, or the special bodies supplied directly by the brand, are the portions of the pie that VW Comerciales intends to explore from now on with more intensity, but without leaving aside the usual market of commercials, in which only Hands a representative on the small segment.

The brand’s commitment to this model has been enormous. New factory, up to 69 different versions, combining three traction systems. Load of between 3,5 and 5,5 tons, interior volume that reaches 18,4 m3, are, among others, some of the elements to be combined. The Crafter offers up to a height of 2,196 mm inside, a width of 1,380 mm between wheel arches and 4.855 mm in length, making it among the most capable models on the market.

Its engines take advantage of the base of the TDI of two liters, with 102, 140 and 177 CV of power, coupled to manual changes of 6 relations or to an automatic with converted of pair of 8 gears for the versions with front traction. This automatic change is the first time it is used in a transverse engine. Another of the most interesting aspects of this new Crafter is the presence of an electromechanical steering, which allows drivers to be available to the driving as the automatic parking or the maneuvers with trailer, the latter especially useful and recommendable.

New for the rest of the range

The range of commercials below the Crafter also registers some touch-ups. On the T6 is offered a new version Transporter Mixto Plus from 19,400 euros with discounts and without taxes, which is characterized by its 6 seats, 3,000 kg maximum weight and a partition panel with the loading area that comes standard, Which facilitates many things, a capacity of load of up to 4.4 m3 and finishes that think much more in the occupants than in the merchandise.

The Rockton version of the T6 raises the price up to 28,500, but also its endowment, with 4-stroke in series, 2 to 9 seats, differential lock, 150 hp engine, 6-speed manual gearbox and 30 Mm which improves its behavior off the asphalt.

For the Pick Up Amarok also has been defined a version with the diesel V6 engine of 224 CV for 27.200 euros, with two levels of equipment and a complete infotainment system. In September will arrive a new V6 engine of 163 hp.

Finally, the Caddy Edition is offered for 16,200 euros. It is animated by the diesel engine of 102 hp and has bumpers body color, sliding door left, leather steering wheel, hubcaps, etc. In addition, the TGI version is now powered by natural gas.