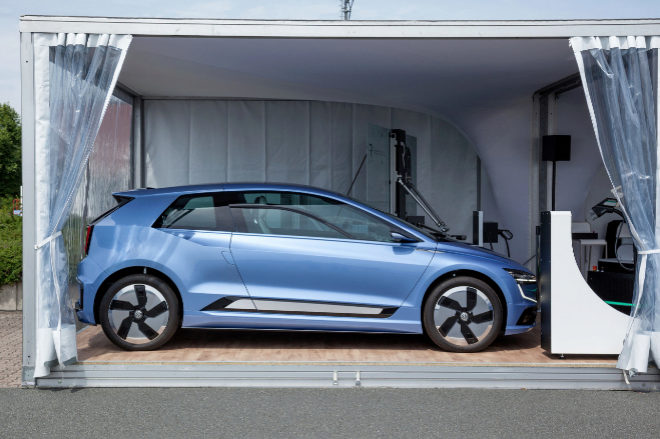 The only technical data that the brand has offered is that its electric range will exceed 400 kilometers. It is also developing mobile recharge robots so that rapid recharge is resolved in garages and other locations.

No big deal Volkswagen has presented an electric concept called Gen-E at a technology event in Hannover. If we consider the intentions of the Volkswagen Group to reposition itself as a leader in the commercial future of electrified cars, this electric compact fits perfectly within the framework of the new generation of “King” Golf, the eighth, which will arrive between 2018 and 2019 To European dealers.

The unveiled concept shows a two doors with a futuristic and sporty design that, in spite of its enlarged figure remembers to the one of the new great flagship of the mark, the Arteon. In the concept the exterior mirrors disappear in favor of two rear view cameras, in order to potential more angular lines. It also shows C-shaped LED headlights, which closely resemble those of the e-Golf that the brand introduced not too long ago. The doors open upwards in scissors, counting on some handles in the body. Also emphasize the lower skirt trim and the spoiler on the B-pillar.

Volkswagen has not leaked any technical data on the car other than it will offer an electric range of more than 400 kilometers. This data is not a record, but a value that seems real for your next electric vehicles. As for recharging, Volkswagen has announced the development of mobile cargo robots to make loading quicker easier in places such as garages.

The brand also highlights the use of an architecture focused on lightness but at the same time has been designed to provide maximum safety in case of accident, something that includes the battery. This is based on advanced lithium-ion cells, while also announcing improved efficiency in the electric motor.