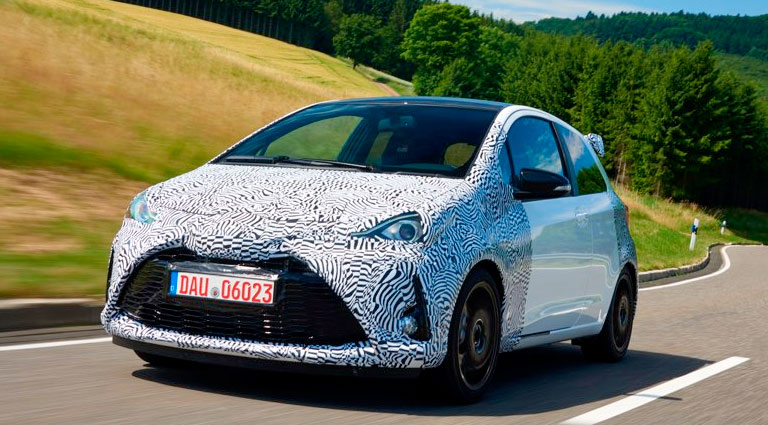 Toyota presents at the Nürburgring its most radical Yaris

Toyota has already set out to storm the roads its most radical Yaris. The small model has a powerful engine of 212 hp. It is a sporty and high performance variant that has been developed and presented on the legendary Nürburgring Nordschleife circuit and will arrive in Spain in January 2018. It will be marketed for € 29,900.

This allows it to be the only model of the segment of urban sports with motor with compressor. The propeller is associated with a front-wheel drive system and a six-speed manual transmission.

The Yaris GRMN features a reinforced chassis with additional supports, including an extra reinforcement bar between the front suspension turrets and a larger diameter front stabilizer bar to ensure high chassis rigidity. The front suspension is MacPherson type and the rear torsional axle type. The shock absorbers are specific and have been developed by Sachs Performance.

In addition, the model has undergone a complete testing program on the legendary Nürburgring Nordschleife, with the help of the racing activities of Toyota GAZOO Racing, and assembles a mechanical differential Torsen type, which improves traction and response to high speed.

Available exclusively with three-door bodywork, Yaris GRMN stands out for its sporty design inspired by the Yaris WRC World Rally Championship. The sports version of Yaris is equipped with 17-inch multi-spoke alloy wheels signed by BBS, a black fin-wing spoiler, and an exhaust line specifically designed for Yaris GRMN with trapezoidal central exit, which gives it a sound Characteristically and spectacularly sporty. It also has exclusive bumper and a large rear diffuser.