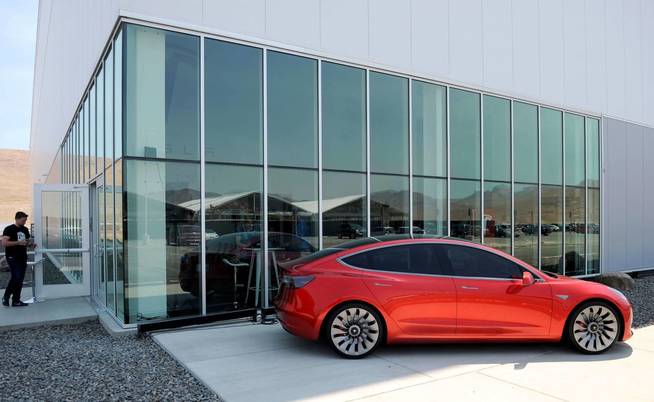 This is the Model 3, the ‘low cost’ car with which Tesla wants to burst the market

The company of Elon Musk has released the first video of its new model, a vehicle within reach of many users to be delivered in late 2017

Model 3, the Tesla vehicle that has arrived to revolutionize the market.

The Tesla Model 3 is already here … or, at least, we have already seen what will be the definitive car with which Elon Musk wants to win the world market of the electric vehicle. There are several models with which the company has dazzled half the world, yes, all of them very exclusive and within reach of only privileged ones. But now with the Model 3 comes the ‘affordable’ car: and for just over 30,000 euros, you can have a Tesla parked in your garage.

Few days ago, Elon Musk published the first moving images of what will be the new model of his company. It is a six-second tuit, in which you can see a close-up of the vehicle, how it accelerates and, subsequently, how it brakes. This is not a model update, but a new vehicle with which to extend the range. So why is it so important? Well, because it’s the car that he craves to get the market with.

Not everyone can face the 83,000 euros that costs in Spain the Model S, let alone the 103,000 € that costs the Model X. That is why, the Model 3 becomes the car with which Tesla wants to reach the Average consumer. If you have been so successful with your most prestigious and exclusive cars, what will happen when a vehicle is launched to the market of more consumers? The company augurs that it can be really successful.

The vehicle that Musk has shared is the so-called ‘release candidate’, that is, the final version that will enter the production chain in the absence of any retouching after the last safety and reliability review. With a price similar to the mid-range and high-end vehicles on the market, surely many consumers will head to their purchases: not in vain, already has 400,000 reserves worldwide.

As a curiosity, Musk has also revealed why the definitive name of this model is none other than Model 3. At first, the idea was to call it Model E … until they discovered that Ford had already obtained the patent for that name For an electric vehicle that will launch for 2019. Thus, they decided to use the 3, the numerical representation of that letter, with the aim of avoiding a possible demand on the part of the company.

And is that, to date, the big problem that the consumer found was the impossibility of buying an electric car for guarantees for a ‘low cost’ price. Tesla arrives with the idea of ​​getting that niche market, which can be made with a significant piece of cake: it will be at the end of the year when these vehicles start to deliver, at which point the rebound effect will increase. As it is seen circulating in the streets, more users will throw themselves for him.

Obviously, it has less luxury features than its two older brothers, but the Model 3 has everything to succeed: it will have a range of 350 kilometers, you can load in any plug in the world – suitable for all types of voltages and amps, Accelerates from 0 to 100 in less than 6 seconds, has a 5-star safety and has autonomous driving hardware, plus all associated safety functions.

Deliveries at the end of 2017
Or, what is the same, has many of the advantages that have made Tesla one of the most attractive companies on the market. Its ample space – it is a five places that has four doors -, its rear propulsion and its double trunk – front and rear – make it stand out above the rest. And, to make matters worse, offers major improvements optional, at the taste of the consumer who wants to spend more in exchange for more advantages, such as recharging in superchargers.

It will be at the end of this 2017 when Tesla begins to deliver its new Model 3, the car that is called to revolutionize the world of electric. Can you imagine buying a vehicle that drives independently, is electric and has a price like a high-end gasoline? Well, in less than ten months, Tesla will make it happen. A quality jump that can mean the definitive takeoff for a company that wants to dominate the electric market.