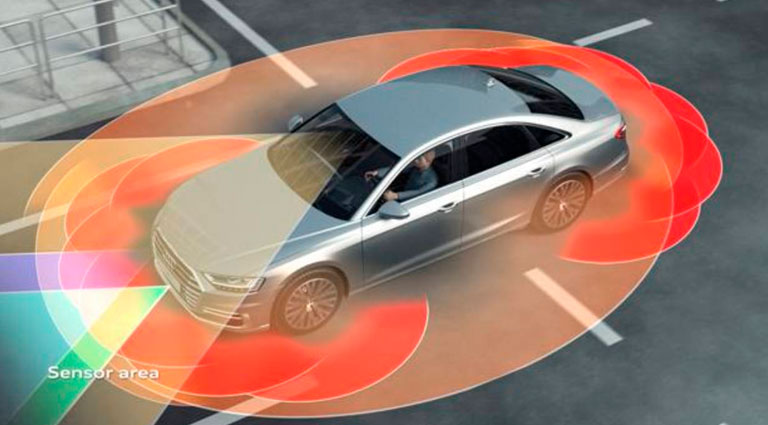 Among video cameras, scanners, ultrasonic sensors and radar, a total of 24 components monitor the environment of the new Audi A8

Berlin Film Festival, February 2016. Amid flash photography storm, a black Audi A8 arrives at the opening ceremony with Hollywood star Daniel Brühl as a passenger, who can not disguise his disbelief after looking at his Side again and again and check that the vehicle moves autonomously until it stops gently in front of the red carpet. However, the true secret star of the night remains invisible: the laser scanner hidden behind the radiator grille of the Audi luxury saloon. A new type of sensor developed to open the way to piloted driving applied to a standard vehicle.

Now, after hundreds of thousands of kilometers of tests, tests and simulations, the new laser scanner debuts in a production car in the fourth generation of the Audi A8, the world’s first car to offer the Audi AI traffic jam pilot, which allows A level 3 piloted driving. This means that the vehicle can take control of the driving in certain situations, taking charge of the accelerator, steering and braking. To do this, the vehicle calculates a very accurate image of the environment by merging all the data collected by the different sensors in the new central driver assistance driver zFAS. The new Audi A8 uses up to twelve ultrasonic sensors, four 360 degree peripheral vision cameras, an additional 3D video camera at the top edge of the windshield, four midrange radars at the corners of the vehicle, a long range radar And an infrared camera on the front, and the new laser scanner.

The conventional radar system is already in charge of scanning what happens in front of the car, while the 3D video camera recognizes the road markings, pedestrians and other vehicles. Ultrasonic sensors and other cameras monitor the entire area around the car. What is really important here is that the different sensors can validate the data through a reciprocal comparison, that is, their specific characteristics in terms of scope and speed of registration should be complementary. And in this sense the laser scanner is an important step forward in improving not only redundancy, but also the detailed recognition of both static and dynamic objects, whether metallic or not.

Faced with the 250-meter range of long-range radar, the 100 meters that can cover the new laser scanner may seem few. However, this new sensor is capable of multiplying by four the field of vision covered by the long-range radar, covering an angle of up to 145 degrees. The vehicle therefore has a more complete perception of its environment, and is able to measure distances more accurately and even more reliably. The new Audi A8 can, for example, interpret the behavior of other road users (pedestrians and other vehicles), as their entrance or exit in the flow of traffic, much earlier than was possible until now.

Installed in the front bumper, under the Singleframe grille, the laser scanner has the approximate size of a fist, counts inside with a rotating mirror and weighs around 500 grams. The scanner emits pulses of light in vertical planes that last barely four nanoseconds. The mirror is responsible for distributing and sending over a distance of 80 meters, at an angle of more than 70 degrees to the left and right of the longitudinal axis of the vehicle. The wavelengths of the flashes are in the near infrared, which makes them invisible and innocuous for the human eye. These pulses of light are reflected and bounced on objects in front of the car, returning to the laser scanner in just 0.7 microseconds, where they are detected by photodiodes that convert the optical signal into digital information that allows to produce an image with a large detail. Like the long range radar, the laser scanner also works in the dark, and is the perfect complement also for the front camera when it reaches its limit, despite the help in this sense the bright lights of the Audi A8.

“In simple terms, we can imagine the laser scanner as a luminous finger that scans the environment and is capable of creating a spatial image of it immediately,” explains Hans-Martin Kroll, an Audi engineer specializing in sensor development for Systems of assistance to the driving.

The image of the environment created by the central driver assistance ZFAS based on the data collected from the various sensors serves as a basis for the operation of all the assistance systems of the new Audi A8, both the adaptive driving assistant and the New active suspension, parking assistance system or the driver’s assistant Audi AI traffic jam pilot.