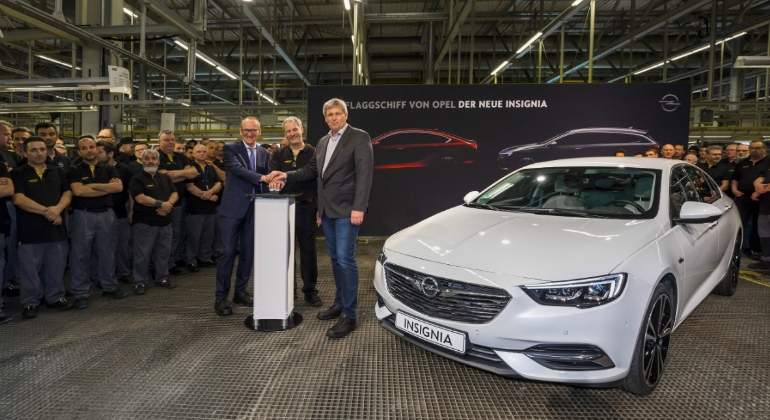 The new Opel Insignia is at the starting line

Today the production of the new Opel Insginia begins. A five-door sedan that has a family version and improves its predecessor in weight, efficiency and technology. In summer comes to the dealers.

Opel is again news, not because of the agreements reached with the French group PSA, but because today just gave the starting signal to a model that, without a doubt, will be key to the brand. We refer to the new Opel Insignia, the sedan of the German firm, which from this moment begins to join the factory in Rüsselsheim.

An Insignia Grand Sport, white and with a 2.0 liter diesel engine of 170 hp, was the protagonist at the end of the production line, in a day in which the president of Opel, Karl Thomas, said: “We took time Wishing that this moment arrived and, finally, it has arrived. It has been a very important day for Opel and for the Rüsselsheim plant. ”

The brand hopes that this new model will do it, at least, as well as its predecessor, which not only reaped success in its struggle with the generalist salons in sales to individuals but also became one of the models most in demand In the fleet channels.

Lighter and more technological
Based on a completely new vehicle architecture, the Insignia, which is now starting to run, is up to 200 kilos lighter than the previous one, has a lower driving position and a more spacious interior. It also draws attention to its sporty design and its technological endowment, which does not lack systems such as total traction with torque vector distribution (distributes the force to each wheel individually in a matter of milliseconds) or certain attendees to the last batch driving.

In summer the second-generation Opel Insignia will arrive in the dealership, in this case with five-door and family cars, and a range of six engines. Half of them are gasoline, among which stands out the new 1.5 liters, which is offered with two levels of power: 140 and 165 hp; In diesel, the protagonists are a 1.6 and a 2 liters, with powers ranging from 110 to 170 hp.