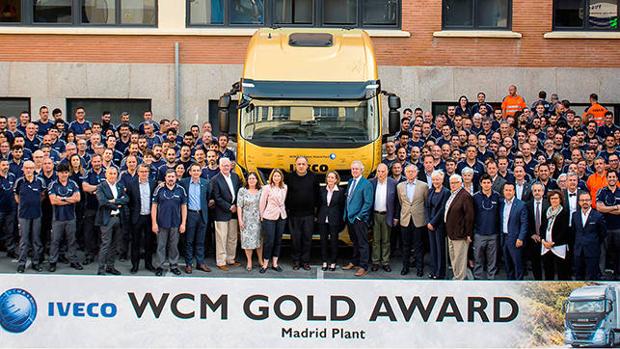 Photo: (The president of the Group, Sergio Marchionne in the center of the image)

The headquarters of Iveco in Madrid hosted an official ceremony celebrating this milestone last Friday, the 2nd. The event was attended by CNH Industrial’s Board of Directors, including Group President Sergio Marchionne and CEO Richard Tobin. Alongside them was Iveco President Pierre Lahutte, as well as other prominent members of the brand. Also included in the act were 300 Iveco employees in Madrid, including management team, representing the workers of the factory. Tom Verbaeten, director of production at CNH Industrial, gave the keynote speech, thanking factory employees for their determination and hard work in reaching this great milestone.

For his part, Sergio Marchionne congratulated all the people involved in the production process for the effort of all these years and for demonstrating how much can be achieved through commitment and teamwork. Marchionne emphasized that such achievements can only be achieved when technical expertise, passion and dedication go hand in hand.

The Gold Level in WCM recognizes the results obtained through a complete reengineering of all processes of the plant, which began 10 years ago, and which has required an incessant effort in continuous improvement in which all workers have been involved. The improvements introduced during these years have been translated into a constant increase of the security, a great quality in the processes of production and the products, and a high level of service.

The Iveco plant in Madrid employs more than 2,500 people and has the highest percentage of women in the sector in Spain. It exports 87% of its production, mainly to European markets, but also to Africa, Asia and South America. Last year, this factory was already recognized with the Award for Excellence by the Kaizen Institute in the category of Continuous Improvement. In addition, the factory in Madrid is also notable for its environmental performance, which has reduced by about 53% CO2 emissions per vehicle manufactured and managed to recycle 99% of its waste.

The Madrid plant specializes in Iveco heavy-duty vehicles: the new Stralis, in the diesel version, the Stralis XP, as well as in the compressed natural gas (CNG) and liquefied natural gas (LNG), the Stralis NP; As well as the off-road vehicle Trakker. In addition, it is now preparing for the introduction of a brand new vehicle for light off-road missions, the Stralis X-WAY. A vehicle, which will reach Iveco dealers across Europe in September and will be launched internationally in Solutrans, Lyon, France, in November of this year.