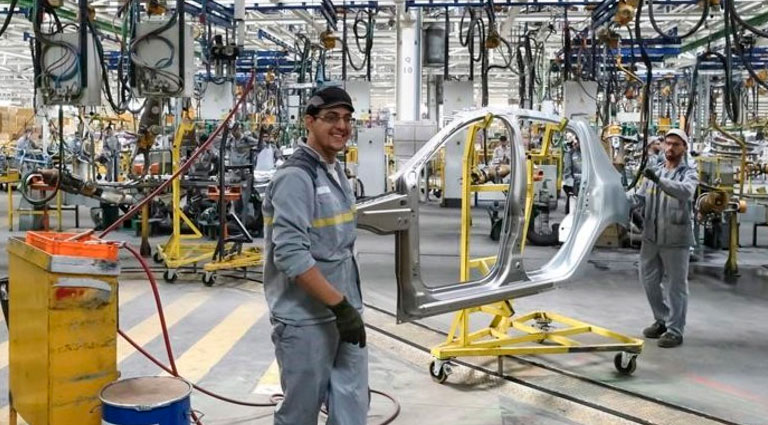 Tangier bursts into the automotive industry

In the corridors and the ships of the brand new Renault Nissan alliance factory in Tangier, giant posters greet the visitors with the slogan “Morocco is passionate”. Certainly, the Franco-Japanese group’s passion for the North African country has translated into a bet with the opening of a mega factory in 2012 that has been increasing its production rate until reaching the million units accumulated until last Monday .

The factory surprises visitors. It stands on an area of ​​300 hectares in the middle of the slightly undulating slopes and converted into a secular in an area located about 20 kilometers from the port city of Tangier. Far from the usual industrial density in Europe, the Tangier plant is surrounded by small villages and houses scattered among pastures in which some cows and donkeys are foraging.

But appearances can deceive. In this rural area is one of the most productive factories of the Renault group, which has been increasing its activity volume from 50,000 units in 2012, its first year of operation, to 273,000 vehicles in 2016 and expects to exceed the figure Of 300,000 this year on its way to reach its maximum assembly capacity of 340,000 cars.

NEAR THE SPANISH FACTORIES

The Renault and Nissan factory in Tangiers has entered strongly on the map of the automotive industry in the European and Mediterranean area. It is within walking distance of some Spanish factories and not only physically, with a one-day truck journey, but also in turnover. In fact, the Tangier factory became a nightmare for the Nissan staff in the Barcelona Free Zone when it was about to rob it of the manufacture of a van that finally stayed in Barcelona for a delay in the initial phase of the plant Moroccan.

In its first years of history, the Tangiers facility, which employs 8,000 people, has specialized in the production of Dacia vehicles, Renault’s low-cost range. Since the inauguration of the North African factory, Dacia has increased its market share to become a market leader with a 29% share. The Dacia Sandero are found all over the streets of Tangier for its double-car facet produced in Morocco and for having a price of the lowest.

But Renault’s passion for Morocco and Tangier may be just the beginning of an intense romance. “We are competing in a region, with Spain, for investments so we have to offer interesting conditions,” said Moulay Hafid Elalamy, Minister of Industry of Morocco, who emphasizes that the North African country’s offer Is based on an “ecosystem” that includes infrastructures, such as roads and a train line linking the Renault plant with the Tangier megaport, as well as training and competitive costs.

The ecosystem created for Renault includes a training center that has so far passed 18,000 young people who have been placed in the factory of the French group or in some of its suppliers, including some Spanish manufacturers like Antolín. “Finding work at the Renault plant in Tangiers is a very sought after because it involves charging 20% ​​more than the minimum wage (about 260 euros per month) and having health insurance, food and transportation,” says Jean-François Gal, director of The plant formed in France and Palencia.

Although in Tangier only Dacia models are produced for the time being, some of which are sold in Spain, the Renault general manager in Morocco, Marc Nassif, admits that “Nissan can help the Tangier plant with the production of some model, but not now”.