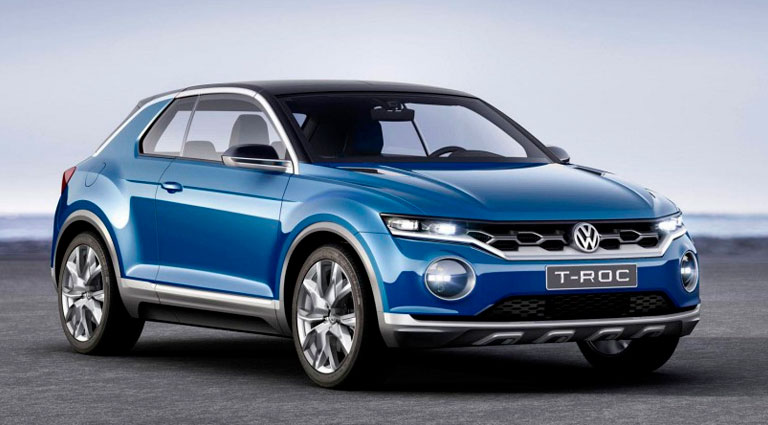 This model, smaller than the Tiguan, will be added another in 2018

Volkswagen has been sensitive to market demand and is expanding its offer of todocaminos, a type of car whose sales grow steadily, while others lose them. In the European market, its weight in the total number of registrations has gone from 19.8% in 2014 to 25% in 2016. And this, coupled with unstoppable growth in supply, has made them market leaders, leaving in second Position to the compact ones that heads the Golf.

In this context, it launches the T-Roc, which increases a range that already has the Touareg and Tiguan in its two versions, short and long. It is placed below them since, with a length of 4.23 meters is, for example, 25 centimeters smaller than the short Tiguan. In addition, these launches will be completed with the arrival of T-Cross in 2018. This latest model, manufactured in Pamplona, ​​takes the basis of the new Polo and will be the smallest.

Inside it picks up the fully digital instrument box (Digital Active Info Display) as an option. The T-Roc also comes with a 6.5-inch infotainment screen that can reach 8 “in the highest versions of the range.

The SUV starts with three versions of equipment. The most basic has the same name as the car (same as the Arteon) and, above, are the Style and Sport finishes. As standard, it includes interesting features such as the Front Assist system with city emergency braking function and pedestrian detection system or Lane Assist Lane Departure Warning.

In the case of Style, Volkswagen plays with the personalization of this, unpublished fact in an SUV of the mark. The two-tone tonality on the body (ceiling, A pillars and contrast mirror housing) or up to four colors for interior moldings appears.

Sport is the top of the range. It focuses on sportsmanship with seats of this caliber and the possibility (optional) of equipping also the two-tone painting. In addition, since its beginning of commercialization can request the package R-Line, with numerous differentiating elements in exterior and interior. Of course, it is only available with the Style and Sport finishes.

The less powerful variants (115 horses) can only be chosen with a six-speed manual transmission. In the intermediate (150 horses) appears the automatic option DSG 7 speeds, and finally, the 190 horses will only be available with DSG.

The 4MOTION all-wheel drive is intended for 190 horsepower (petrol) and variants of 150 (diesel) automatic horsepower. Otherwise, the T-Roc is front-wheel drive.

The all-wheel drive versions include the standard 4Motion Active Control with driving profile selection. Using a roulette wheel located behind the gearbox, you can choose between ‘Street’, ‘Snow’, ‘Off-road’ and ‘Off-road individual’.

The T-Roc with both all-wheel drive and front (optional) has five driving profiles to choose from: Comfort, Normal, Sport, Eco and Individual. Depending on the chosen profile we can vary parameters in the DSG change, direction or in the adaptive suspension (ACC).

Although 80% of T-Roc cars are sold between Europe and China, the company’s goal is to make it a global model, as markets like “Brazil, India, Russia and the US are becoming more important” according to Words of Jürgen Stackmann, head of Sales, Marketing and After Sales of Volkswagen [and before Seat president]. In fact, it predicts that “a global sales volume of compact SUVs of about 6.4 million units per year, will move to about 10.6 million over the next decade.”

Its exterior design has several aspects that stand out. In the rear end, a very wide front grille that integrates the headlights, divided by a thin chrome profile. At the bottom, there are body protections located on the front, rear, footrests and wheel arches.

The side silhouette is characterized by another chrome plating that extends from the A-pillar throughout the roof line to the C-pillar.