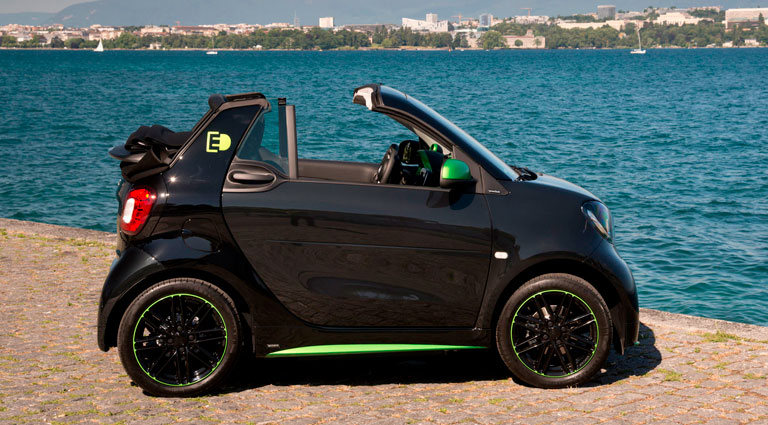 Smart Cabrio Electric Drive: only the wind is heard

With the arrival of this new version convertible, it completes the family of electric models of Smart, that until now counted on the versions Fortwo and Forfour.

Smart bet decisively by the electric mobility and, in fact, everything indicates that in the future its models will end up being propelled only by this type of energy. Proof of this is that in some of the countries that are more favorable to these zero emission vehicles, such as the United States, Canada and Norway, the Daimler Group brand has stopped selling the other variants with combustion engines.

In addition, during the presentation of the new Smart Cabrio Electric Drive, the executives of the firm put Spain as an example of the rapid change that society is experiencing. Electric vehicles have had a fairly limited reception in our country and, in 2015, only 55 Smart units sold with batteries. However, after the launch of the car2go carpool program at the end of that year, many users have been able to drive such cars in urban traffic and have been pleasantly surprised by the experience. In fact, Madrid has become the most successful city for car2go among the more than thirty where this system operates around the world: the capital of Spain is the one with the largest number of registered people and it is also where More kilometers have been traveled.

As a result, Smart’s Spanish subsidiary has ordered no less than 1,000 units of electric variants to sell in 2017. Although it seems that more than 750 will not be delivered, they say demand will be much higher.

The new Smart Cabrio Electric Drive, which will be delivered to the first customers by the end of next July, has a canvas hood that folds in two phases, operation for which only takes 12 seconds and can be done with The vehicle traveling at any speed. Its homologated autonomy is 155 kilometers, a figure that will always be above 100 kilometers in situations of real driving.

This distance should be more than reasonable for the majority of users of this car because, according to studies, the average of its owners are 35 kilometers per day.

Like its brothers the Fortwo and the Forfour, the new electric convertible has cut practically in half the times of recharge with respect to the previous generation. In a European household outlet, it will take six hours to charge 80% of a depleted battery, a time that will be reduced to three and a half hours if we use the specific wall charger. Starting in the spring of 2018, the brand will offer as an option a charger of 22 kW, which will allow to fill that 80% of the battery in less than forty-five minutes.

The most important feature of the Smart Electric is how smooth and quiet its driving is. With the engine and the propulsion at the rear, and the radiator, electrical components and other elements in front, the weight distribution is very balanced, which makes the car gives a great feeling of poise on the road and is very stable. Another surprising point is its turning diameter of only 6.95 meters, which allows to turn in unlikely spaces.

Mechanically the convertible is identical to its brothers. It has an electric motor of 81 horses and a lithium ion battery composed of 96 flat cells placed in parallel, which work similarly to a set of batteries. Its capacity is 17.6 kWh and weighs 160 kilos.