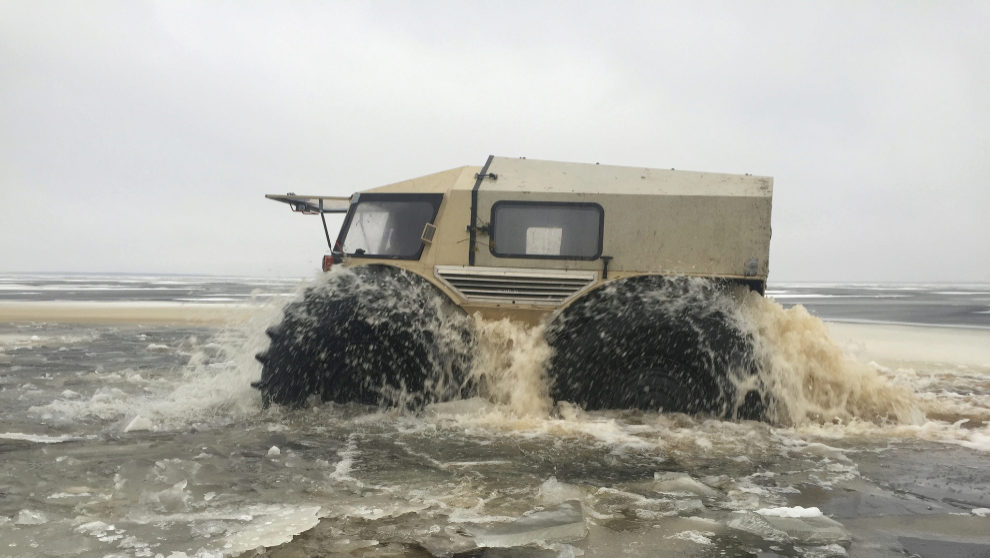 Sherp, the most brutal 4-seater and amphibious 4×4 that comes from Russia

We present the real yellow tractor. Sherp is a 4×4 able to overcome obstacles up to 70 centimeters high, tackle slopes of 35 degrees and load up to 1,000 kilos. In addition, it is amphibious and has a modest price ranging from 43,500 to 58,000 euros.

From Russia comes the most radical 4×4 two-seater, able to move easily by any type of firm: sand, ice, snow, marshes, and even over water, because it is also amphibious. Overcomes obstacles up to 70 centimeters high, such as fallen trees or stones, faces 35-degree slopes, can carry up to 1,000 kilos and is equipped with four gigantic 1.6-meter diameter, tubeless and low pressure tires. They are a development of the brand that give it a surrealistic tractor.

Sherp is able to move easily through sand, ice, snow, marshes, and even over water, because it is also amphibious.

The maker of this peculiar vehicle is the Russian company naming the vehicle, Sherp, based in Moscow and created in 2012 by Saint Petersburg designer Aleksei (Alex) Garagashyan. After researching on the best technical solutions, the most suitable materials and components and after working on different prototypes, in 2015 started the serial production of Sherp, an off-road vehicle whose creator explains “our main objective was to ensure its best capacity Cross-country and I think that’s where our machine is second to none. ” In addition, it is a simple vehicle of use and maintenance an advantage that those who seek to ‘get lost’ in the most remote regions of the world value.

On a reinforced chassis, the Sherp flat-walled body is made of aluminum, coated with a tough polymer, which contributes to its lightness as it weighs only 1,300 kilos. Its peculiar dimensions give it that personal and striking appearance. It measures the same of high that of width, 2,52 meters, and only 3,4 of length, with a free height to the ground of 60 centimeters. It only has two seats, which are accessed through the front, while the rear can be customized to suit the needs of its users, for example cargo area with watertight boxes or beds. Under the floor has a tank of 170 liters that allows to store the necessary equipment or an additional tank of fuel.

The Russian vehicle is equipped with four gigantic 1.6-meter-diameter, tubeless and low-pressure tires

The engine is a Japanese four-cylinder Kubota V1505 1,498 cm3 diesel, which develops a maximum power of 44.3 hp, combined with a five-speed manual gearbox with short developments. On land you can reach a top speed of 40 km / h and 6 km / h over water. The suspension is circular pneumatic.

These characteristics allow you, for example, to leave the ice and overcome almost any obstacle, even continue to circulate with two wheels in the air. Hermetic body and wheels with 800 liters of capacity allow you to float. Just in case, it also has valves to help evacuate water from the body.

The fuel tank has a capacity of 56 liters, which with a consumption of between 2 or 3 liters per hour, depending on the characteristics of the terrain, give it an excellent autonomy, which can be extended with four additional tanks of 58 liters Each, which are placed in the center of the wheels. For radical adventurers the Sherp offers additional equipment such as rear view camera, additional led lights and a unit to heat the cabin.

The Sherp already circulates throughout Russia, many countries in Eastern Europe and Canada. Vehicles of this type, such as the Argo, which we have already reported or the 8×8 we published recently, or are a whim with many followers among other things because their price is usually not very high. In the case of Sherp, it is between 43,500 and 58,000 euros.

The body of the Sherp is made of aluminum which contributes to its lightness since it only weighs 1,300 kilos.