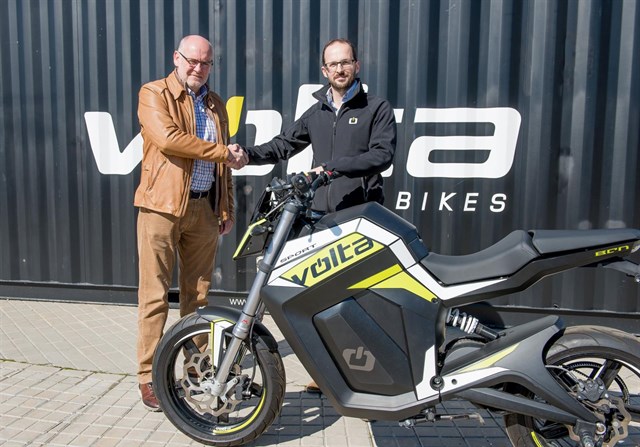 Designed in Barcelona, ​​they have a power of 35 hp and a top speed of 120 kilometers per hour.

An electric motorcycle from the Catalan firm Volta.

Segway Spain will be the official distributor in the national market of the range of electric motorcycles of Volta Motorbikes, designed in Barcelona and produced in Figueres (Girona), reported Monday in a statement.

Volta, founded in 2011 and betting on electric motorcycles as a means of ecological urban transport, will open its first flagship store in Barcelona before the summer. The bike is operated as a ‘scooter’, as it has no gears and is lightweight (130 kilos), but it has the aesthetics and power of a sport bike with a larger displacement: 35 horses and 120 kilometers per hour of maximum speed.
It can drive with the car license, has a range of up to 100 kilometers, mobile connectivity and can be recharged in a conventional plug.
The start-up of the production of these motorcycles has required an investment of 2.5 million euros and in the next few years the company plans to launch investment rounds to expand the range of products, implement brand development and open new markets.

This year they will produce 600 units and in the next three years expect to reach 1,500 units annually, mainly destined to the European market, with forecast of internationalization towards Latin America and Asia, according to Volta Motorbikes founder Marc Barceló.