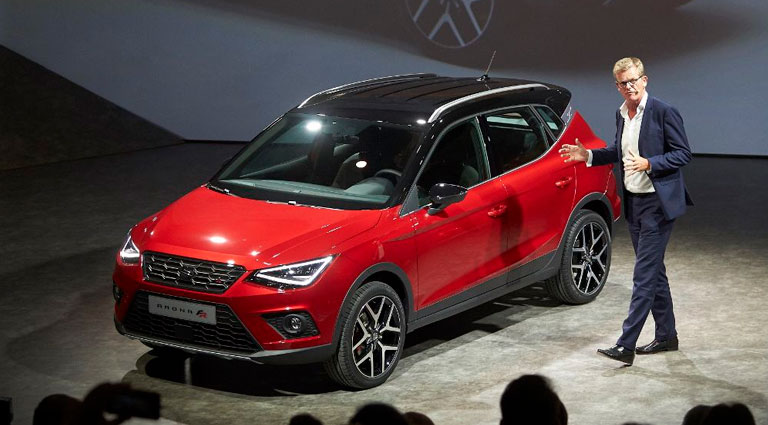 Seat presents the new Arona, the ‘crossover’ to be manufactured in Martorell

The vehicle, presented hanging from a helicopter over Barcelona, ​​will reach dealers in the last quarter of the year

The Seat Arona, the new compact crossover that will be manufactured at the Martorell plant, the car factory that produces more vehicles in Spain (one in five passenger cars). The act of presentation, preceded by the ride in the air of the vehicle, hanged by a helicopter, has the chairman of Seat, Luca de Meo, who has explained the details of development and design.

The car, which will hit the dealerships in the last quarter of the year, is the fourth model of the biggest product offensive in the history of the automobile, since in 2016 Seat launched the Ateca, and this 2017 has brought to the market the renovation The Lion, the fifth generation of the Ibiza and the new Arona.

The Arona is Seat’s second SUV after the launch of the Ateca, and with this new model the automotive firm will increase the market coverage to 75%, ie the company covers 75% of the total number of cars Are sold in Europe – thanks to the Ateca and Arona, has gone from little more than 50% to 75% -.

For the production of both models, the automobile has increased from two to three production shifts of line 1 of Martorell, and for the launch of both models will be contracted in 2017 to about 500 temporary employees, until the end of the year.

In total, Seat has invested in the new Ibiza and Arona a total of 900 million euros in investments and R & D expenses, and in 2018 the company will launch a third SUV, up to seven seats and that will be positioned one step above Of the Aztec.

Seat expects to further strengthen its sales with the new Arona, as the company has sold between January and May 13.9% more than in the same period of 2016, to 201,300 cars.

The growth in sales has allowed to increase the turnover of Seat by 20.2% in the first quarter of this 2017, to the record figure of 2.487 million euros, and after closing 2016 with the best financial results in history, profit Operating in the first quarter stood at 56 million, 4.1% more than in the same period of 2016.