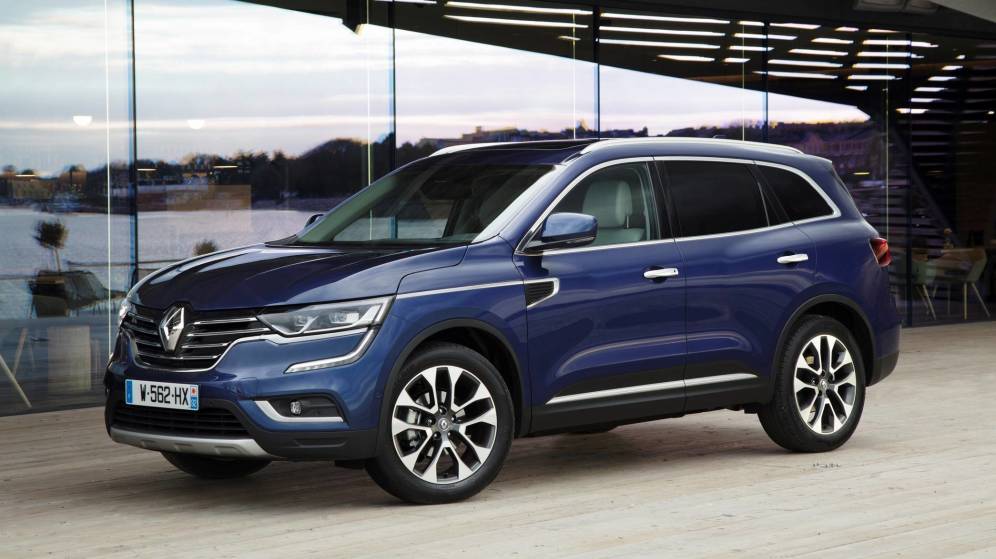 Renault completes its all-new range with the new Koleos

After the Captur as the small todocamino, and with the Kadjar as the compact, comes to market the new large SUV of the brand with a price starting from 28,390 euros

Renault completes its all-new range in the international market with the launch of the largest and most complete version, the Koleos, which arrives as a completely new model to be integrated in the D segment, with a robust style, elevated ground clearance, an improved interior And the best multimedia connectivity. Diesel engines of 130 or 175 horses and prices starting at 28,350 euros.

The new Koleos, already sold in other areas of the world, measures 4.67 meters in length and offers the option of four-wheel drive. This model is the highest exponent of the range of todocamino of Renault that complete the Captur, a SUV of segment B, and the Kadjar, of segment C. It is designed with the same modular architecture of its brothers Espace, Talisman and Kadjar, like Also Nissan’s all-terrain vehicles, the X-Trail and the Qashqai. And it shares with the Talisman sedan the same length / wheelbase ratio, albeit with a greater free height to the ground.

This Koleo has nothing to do with what Renault launched a few years ago, smaller and also quite less luxurious. Among its novelties, numerous aesthetic changes in the exterior, highlighting new headlights full Led with double function, crossover and road. At the rear, the lights are equipped with Edge Light technology and offer a 3D effect.

This new range of Koleos has been designed with a wheelbase of 2,710 mm to provide a generous living space, but is a five-seater. As for the trunk, it is equipped with a false floor to offer a flat bottom. Thus, it has a load capacity of 579 liters expandable to 1,706 liters by lowering the rear bench. To this must be added the 35 liters of the various spaces spread over the interior, among which stand cup holders with heating or cooling function. Options include the hands-free opening of the gate and an electric towbar.

The Koleos is available with two or four-wheel drive. But all versions have a ground clearance of 210 mm, which gives the new model certain possibilities in off-road driving. The four-wheel drive versions are equipped with All-Mode 4×4-i technology, which is already present in other models of the Renault-Nissan Alliance. It is an integral transmission system that guarantees the ideal traction in any type of soil.

Through a selector the driver can choose the mode of transmission between 2WD, for permanent front wheel drive, 4WD AUTO, so that the system decides where more traction is needed, sending up to 50% of available torque to each axle. And finally the 4WD LOCK mode, for conditions of very low adhesion, like snow, mud, earth … and always at speeds of less than 40 km / h.

As for its mechanics, the new Koleos is offered only with diesel engines, with two alternatives, both with stop / start technology. The access unit is the 1.6 dCi four-cylinder 130 hp which is only available in two-wheel drive versions, with the six-speed manual gearbox. The 2.0 of 175 hp can be coupled with an automatic X-Tronic box, and have two or four-wheel drive, but can also rely on the manual shift, in this case only in 4×4 versions.

The new Renault Koleos will be sold in 80 countries and manufactured in Korea. However, it is a vehicle that has been fitted to the European taste. Thus, from the second level of equipment, the R-LINK 2 multimedia system is offered, with a connected tablet that manages most of the vehicle’s features (multimedia, navigation, telephony, radio, parking and driving aids …) . And that is compatible with Apple CarPlay and Android Auto.

As for prices, this new generation of Koleos, the range starts at 28,390 euros, with the discounts of the brand. Up to seven versions are offered, including the Initiale Paris, with a premium finish and 175 hp motoring, offered for 41,504 euros and includes 4×4 and automatic transmission.