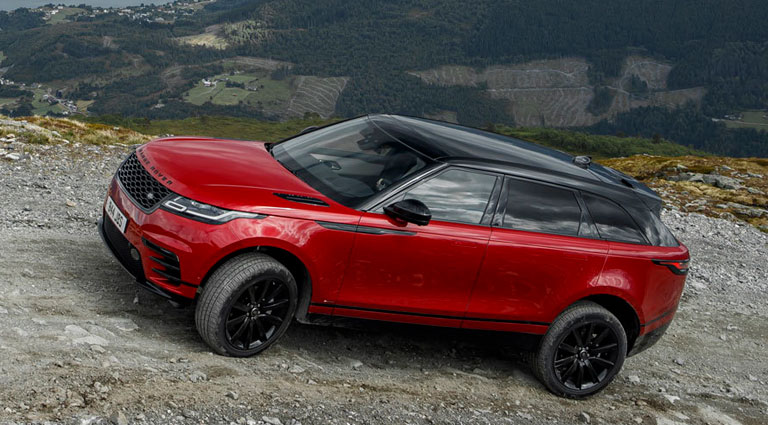 For price and size, the new Velar is positioned between the compact Evoque and the voluminous Sport, but its elegant and minimalist lines give an indisputable personality to the fourth model Range Rover range.

On the outside, the simple lines, clean and at the same time stylized for their great proportions, dominate an aerodynamic profile, that obtains the lowest coefficient of resistance to the wind of the whole range, with a Cx of only 0,32. Details such as ultra-thin LED headlamps or flush door handles, which unfold when the locks are unlocked or when the engine is started, contribute to the smooth, perfect and uniform layout of a body made of mostly aluminum.

But if on the outside the stamp of the Velar catches the attention of anyone, when we enter its room the expression of wonder is even greater. The dashboard, completely horizontal and divided into two well marked parts, is absolutely minimalist and only has a button in the area next to the steering wheel to start and stop the engine. The two halves are separated by discreet air outlets, also in horizontal format, and the most striking feature of this model is the center console, dominated by two high resolution touch screens and ten inches each.

These screens, which are part of the information and entertainment system Touch Pro Duo, are fine glass and provide graphics of exceptional quality. From them intuitively handle almost all the functions of the vehicle and in the console only we find three rotary controls, plus a small one for the volume.

The refinement, the sophistication and the high technological content that is in the interior is accompanied by impeccable finishes, with the use of materials of excellent quality, some of them quite new. This is the case of one of the textile upholstery offered as an alternative to leather, made with recycled plastic bottles and which stands out for a soft and pleasant touch. In addition, it is sturdy and clean with ease.

This elegant interior also has comfortable seating and a generous space for four people. Behind, the end places are wide, both in width and height and in the available leg space, however, the center, as already happens in most vehicles of good size, is not intended to be used more That in specific moments.

The bulging of the transmission tunnel and the rigidity of the armchair and the backrest do not advise its use for long distances, although an adult mates without restriction in her. The boot also has a good capacity of 673 liters, expandable up to 1,731 if we completely abate the rear backs, which are split in a ratio of 40:20:40, in case we just need to enlarge the cargo compartment a bit and keep some Of the back seats.

The new Range Rover is built on the platform of the Jaguar F-Pace, but does not share too many parts of the chassis with this, because the dynamic qualities on the road of his brother, Velar adds a superior off-road capability, as is prescriptive in the brand . With a similar suspension scheme in both cars, double-triangle in the front and multi-link in the rear, the Velar has adaptive shock absorbers in all versions, which regulate its hardness instantly depending on the type of use and the needs of each moment. In addition, the most advanced variants of the range, those with V6 engines, add a pneumatic suspension that allows superior comfort and more possibilities of regulation.

With this pneumatic suspension, the body height is automatically reduced by 10 millimeters when it exceeds 105 km / h, to improve aerodynamics and promote fuel economy. It also drops 40 mm when the engine is turned off, so that the entry and exit operations are done with less difficulty. Another benefit is found in off-road driving, as the vehicle can be raised 4.6 centimeters from the simpler versions, which means that the headroom is 251 millimeters. And to load and unload the boot or tow a trailer, there is a button that adjusts the rear height in a range of 5 centimeters.

The mechanical offer is composed of three alternatives diesel engine and gasoline other, in all cases linked to the traditional eight-speed ZF gearbox used by many models of the Group Jaguar Land Rover and that works with great softness . Among the diesel engines are two four-cylinder and 2.0-liter, with respective powers of 180 and 240 horsepower, to which must be added a V6 3.0 with 300 horses and a huge torque of 700 Nm, which makes it tremendously fast From very low revolutions. The least powerful mechanic achieves an average consumption of 5.4 liters per 100 kilometers traveled, equivalent to 142 grams of CO2 per kilometer.

Inside the gasoline engines there are also two four-cylinder and 2.0-liter, in this case with powers of 250 and 300 horses, while the V6 3.0 reaches 380 horses, a figure that allows you to move from 0 to 100 km / H in just 5.7 seconds, accompanying that acceleration of a hoarse and captivating sound.

The range of finishes that the new Velar has is immense. Part of a basic version and another R-Dynamic, each of which in turn have four types of termination: Standard, S, SE, HSE. For next year the range will be completed with an even more luxurious variant, called First Edition, which will only be available for V6 engines. Amongst other things, it will have as part of its standard equipment an interior fully upholstered in leather, specific tires of 22 inches, a sound equipment Meridian of 1,600 watts with up to 23 speakers and headlights Mátrix Laser LED, that allow a light beam depth Of 550 meters that, in addition, varies in its form to offer the maximum visibility to the driver and not to disturb other vehicles that come from the front.

As far as safety equipment is concerned, the most modern Range Rover does not lack detail and to the most habitual elements, they join very useful systems of aid to the driving and novel. For example, Velar, which can carry up to 2,500 kilos, has a mechanism that simplifies the complex maneuvers with trailer. Thus, instead of using the steering wheel and having to turn to the opposite side when reversing, the movement of the trailer is controlled by one of the controls of the central display of the information and entertainment system and the brake pedals And accelerator. Then, depending on how the trailer is moving, the steering of the car is accordingly acting autonomously.

The cameras located at different points outside the vehicle provide a 360-degree view, which is very practical not only for parking, but also for navigating complex areas, because they allow us to see precisely the site where the wheels are going to pass.

The Touch Pro Duo system provides us with a 4G connection and allows you to connect up to eight devices at the same time to share the internet. The head restraints can be integrated with eight-inch touch screens, which work independently and are connected by bluetooth to the headphones.

Also new is the Activity Key wristband, with which you can open and close the vehicle without having to use the key, which would stay in the car and deactivated, for example, while we play sports and we can not carry it.

As is standard in Land Rover, to present the new vehicle they prepared a complete route of more than 600 kilometers, this time by the spectacular landscapes of Norway, consisting of different types of road and off road sections where to test the capabilities of the car. The motors we could drive were the V6 gasoline and diesel, both quite refined and with an excellent response to move smoothly over the two tons of weight that has this model.

The electric steering is direct and has a precise touch, which together with effective suspensions, allowed us to keep the vehicle in the desired path without any effort, although much of the route traveled through narrow and turned places. Comfort, in general, is one of the highlights, just like that improbable dynamism of such a mass.

The Intelligent Driveline Dynamics all-wheel drive system optimally distributes power to each axle, and the TVB torque distribution control sends the right force to each wheel, applying the brakes to the inside of the curve if there is danger That the car deviate in excess of the track.

If we talk about off-road the note is outstanding. With the famous Terrain Response, a selector of 4×4 driving modes that acts on the engine, gearbox, traction, suspension and stability control, you can choose the most suitable program to each surface: next to Eco , Comfort and Auto special for road, there is another one for zones of gravel grass and snow, a room for mud and ruts, plus a specific one of sand. The R-Dinamic versions carry Terrain Response 2 and an additional mode (Dynamic), configurable to the taste of the driver.

Other interesting systems for driving on tracks are the descent and cruising controls for off-road areas, which allows us to select a constant pace between 8 and 30 km / h, to ignore the accelerator and focus all our attention on the steering wheel when The road is complicated.

The combination of so much technology offers off-road levels unimaginable in a car of this size (4.80 meters in length). With air suspension, the angle of attack is 28.89 degrees, the ventral 25.5 degrees, the exit angle 29.5 degrees and the wading depth is no less than 65 centimeters. During the test we went up and down authentic walls with loose stones and the floor very broken, we got angles of inclination where it seemed a miracle not to overturn and we raffled obstacles that no owner of the vehicle will believe they are possible to overcome.

The Velar will reach the dealerships at the end of summer, with a price that will start at 60,250 euros. The most expensive version will be the First Edition with V6 petrol engine, which will cost 124,750 euros when it goes on sale in 2018.