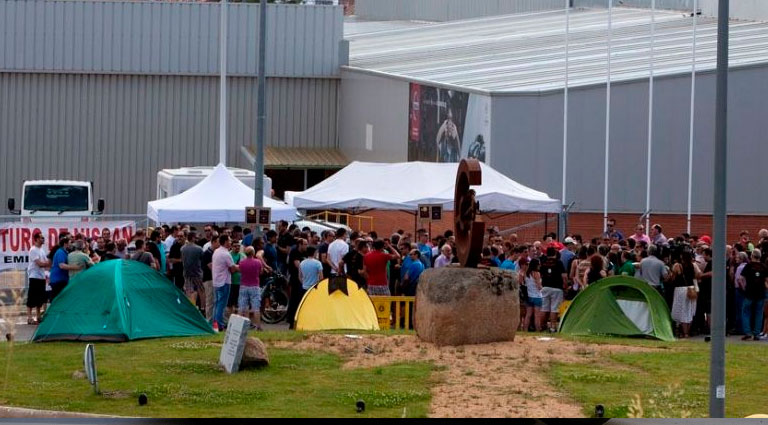 Agreement in extremis between workers and company in Nissan Ávila. The plant will switch from making trucks to making spare parts in 2019.

The Avila plant of Nissan does not close. After a marathon day, at 2.35 in the morning a pre-arrangement was made official to reconvert the plant. It will go from assembling trucks to being a plant that makes spare parts for Renault and Nissan brands.

The agreement, which the Works Committee is presenting to employees, will be ratified at the end of the meeting.

In exchange for not closing, the Alliance Renault Nissan demanded as a condition sine qua non that the employees of Nissan Ávila integrated this year in the agreement of Renault Castilla y León.

The employees have agreed to go through the Renault agreement and this year as Nissan intended. The problem for Avila’s workers is that they will lose up to 30% of their salary. The pre-agreement signed includes the workers’ request that all workers have an equal wage loss, since depending on the reconversion there would be some who did not lose anything while others would see their wage bill reduced to that 30%.

In addition, the agreement provides that the company gives a compensation bonus up to 3.5 times the wage loss that each worker has. That is, if a worker loses 5,000 euros, he will receive a compensatory payment of 17,500 euros.

In addition, according to the company, the transfers are minimized through a Temporary Regulation of Employment (for training) with a complement up to 100% of the salary. Since the demand for the NT400 truck that is currently manufactured has fallen, until 2019, the factory will have a surplus of workers. Between management and unions has been agreed this formula “as a guarantee of employment for all workers in Avila.”

The current staff maintains their seniority rights and will continue to generate economic rights for up to five five-year periods.

Those workers who do not want to be included in the Renault agreement will be able to take part in a low incentive plan of 50 days per year worked.

The situation in the Avila factory took a radical turn when Nissan confirmed at the beginning of the year the cancellation of the production of the truck NT 500, that had started three years ago and that should have been maintained in the time until 2023. The company considered unviable the cost Of the adaptation to the new engines Euro6 with less emissions pollutants.

In addition, the fall in demand for the second vehicle they manufacture today, the smallest NT400 forced to revise production volumes by 40%, to 9,500 units by 2017. And that, with the sword of Damocles that supposed the fact That the life cycle of this vehicle ended in 2019-2020.

In this context, the Renault Nissan Alliance commissioned the Spanish company, José Vicente de los Mozos, president of Renault España and responsible for manufacturing in the Renault Group, in February to find a way out of the factory before the summer.

Initially, three possibilities were posed: to find a vehicle that entered the production chain once the NT400 had finished; Converting it to a factory that produces parts and spare parts for the other plants that the alliance has in Spain (two of Renault in Valladolid and Palencia and another of Nissan in Barcelona) or close the facilities.

On April 20, De los Mozos revealed that the option chosen was the second. “This is the best solution for Avila because it will stop manufacturing the NT400 truck in September 2019.” “And Avila will be the only factory in the Alliance that will manufacture spare parts in Europe. Besides, if the Alliance had not wanted a solution for Ávila, I would not be here. We have given a solution and we want all those who want to be on board. We need motivated people, “he pointed out that day. The transformation will involve an investment of 40 million euros and will lead the workers of Avila who join the project to integrate into Renault Castilla y León.