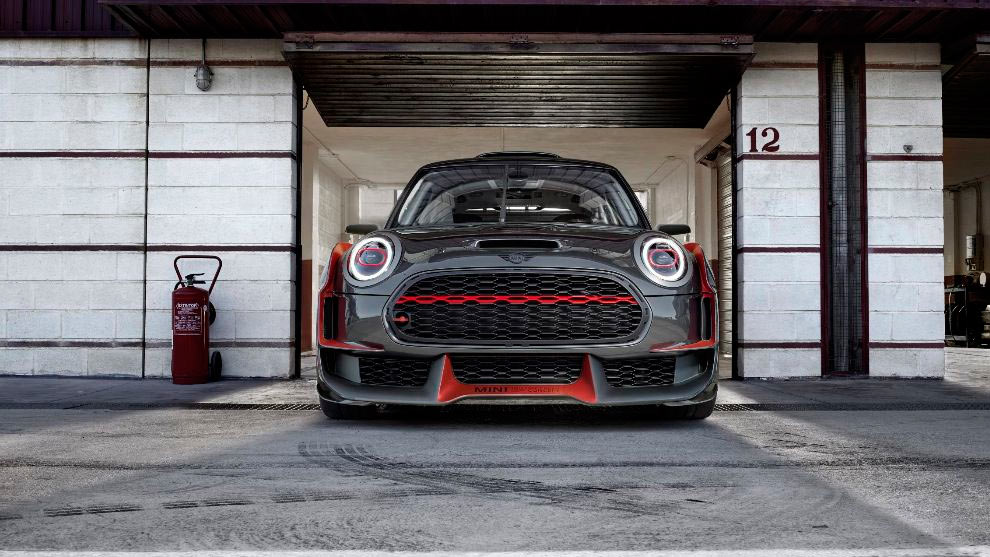 Inspired by the legendary Mini Vehicle triumphs in the Monte Carlo Rally exactly 50 years ago, the new prototype materializes the concentrated dynamism and ultimate driving fun, both on the circuit and on the road, as they did in 2012 with the MINI John Cooper Works GP or in 2006 with the MINI Cooper S with Kit John Cooper Works GP. Two models of which only 2,000 units were manufactured.

“The MINI John Cooper Works GP Concept is based on the uncompromising driving experience and high performance found in motorsport,” said Peter Schwarzenbauer, member of the Board of Management of BMW AG, responsible for MINI, Rolls- Royce and BMW Motorrad. “This is fun to drive in its purest form.” Clearly wider than the current MINI large air intakes and precisely shaped air deflectors dominate the front, to which add the large front skirts – made of carbon fiber – and rear, side skirts and a prominent aileron in the roof that give it an aspect of security in itself. In addition, the use of lightweight materials, such as carbon fiber, optimizes the power / weight ratio of the vehicle already known as Mini.

In addition, the space between the front main body and the air deflectors further strengthens the appearance of the vehicle. The color contrasts common to John Cooper Works come in the form of an exterior paint finish in Black Jack Anthracite, which shines between gray and black, and the Curbside Metallic Red enhancement color (a shade of matt red). The Metallic Curbside Network brings a fresh interpretation of the classic John Cooper Works red and visually enhances the optimized geometry of components and added parts. In the center of the front, MINI’s iconic design features, such as the elliptical headlights and the hexagonal radiator grille, sharpen the vehicle’s identity and its recognizable character. At the same time, elements such as the characteristic bonnet with a prominent air intake, the honeycomb hexagonal radiator grille and air intakes in the front apron emphasize the sporty appearance of the vehicle. The sides
The carbon fiber side skirts represent the lowest edge of the body. 19-inch light-alloy Racetrack with classic multi-spoke design highlights the high performance of this prototype. The contrasts in Curbside Metallic Red, along with the Highspeed Orange inside the rims, and the “GP” logo offer an even more energetic design to the wheels. In the rest of the vehicle, the Curbside Red Metallic and the Highspeed Orange provide the ideal touch to the bases of the exterior mirrors and the door hands, respectively. The back
The rear of the MINI John Cooper Works GP Concept continues the impressive use of the front and side forms. Once again, the large surfaces are framed by air ducting elements accurately, and the positioning of the LED taillights very outwardly highlights the dynamic focus of the vehicle. Sophisticated details, such as half of the Union Jack on each side, represent a nod to the British origins of this prototype, while giving it a technical and sporty touch. The prominent roof spoiler is a visual statement of intent and integrates elegantly into the geometry of the side elements.
Like the front and the flanks, the lower section of the vehicle has a very precise and dynamic design. Air intakes and carbon fiber air baffles are in optimum positions, and the two rear-end rainlamps improve visibility in wet runs. The classic double central exhaust pipe at the bottom of the rear materializes the spirit of John Cooper Works to create a very attractive effect.

Simple and inspired by the circuit

The interior of the MINI John Cooper Works GP Concept is reduced to the basics: the safety cage joins little more than a pair of low-mounted wraparound seats with five-point seat belts and a cleanly designed dashboard . The gearshift is carried out with the steering wheel cams.
All interior elements are centered directly on the driver. The concept of control and visualization, with digital instrument panel and Head-Up Display, locates the information relevant to the situation directly in the visual field of the driver, allowing to focus completely on the road. Moreover, the interaction between the driver and the car is digital, with tactile adjustment of the suspension characteristics in the usual central MINI instrument cluster. As required by the digitization, the screen is now large format. The task of providing a link between the digital and analog world is left in charge of the large emergency stop button and the traditional MINI pushbuttons with start / stop button.

Also, after removing the rear seats, the surfaces between the elements of the safety cage and the rear compartment are upholstered with light panels with textured details and hexagonal pattern, while the doors are opened with built-in handles made of textile strap, allowing the driver and front passenger to exit through the safety cage in the style of racing cars.
As for the interior is a confrontation between the less usual aesthetics of the body of race cars and the exclusivity of production vehicles. The soft black leather of the head restraints and reinforcements offers an elegant contrast with the black and white fabric of the center section of the seats. A new 3D weaving technique provides a modern touch, while the details in red are a visual statement. The bright aluminum safety cage also clearly stands out for the black 3D parts printed on the doors and dashboard, and a slightly structured trim with hexagonal graphics reinforces the sporty look. The Curbside Red Metallic adds a touch of color to some functional components, while the Highspeed Orange tone in details such as seat belt straps, inscriptions and seams on the steering wheel and seats acts as a second enhancement color that complements red . With 3D printing and weaving techniques, MINI brings technological details to the interior of this prototype that allow production without tools and easy customization in the future.
Finally the vehicle number 0059 refers to the year in which the classic MINI was born: 1959.