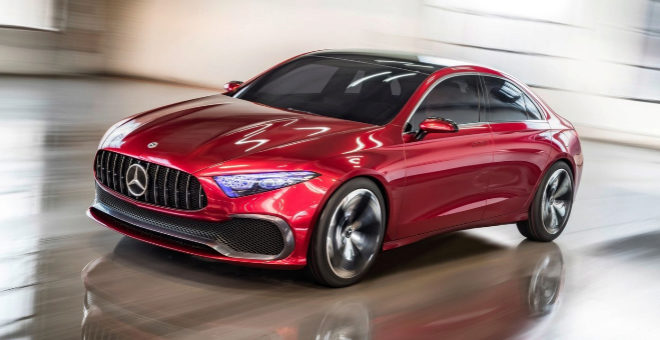 Mercedes Concept A Sedan, model of the compact futures of the brand

With a clean and elegant design, Mercedes-Benz shows the line that will follow the future compact cars of the brand.

The Mercedes-Benz Concept A Sedan that showed yesterday the brand of the star is the first step towards the renewal of the entire range of compact vehicles that have so many sales successes and rejuvenation of its image – and its clientele – has given to the Stuttgart.

The prototype is a first sign of intentions of where the design of the future Class A, CLA and GLA will go. Mercedes speaks of a greater simplicity of lines (and it is certain that it does not have as many nerves as the present ones) but in addition there are other interesting details. For example, the front, inspired by the AMG GT R (and we have also recently seen transferred to the GLC AMG) with the Panamericana grill that seems to reach even the Mercedes access models.

The headlights are the front element with a new design, because the bottom of the bumper is also inspired by the AMG versions. And in the rear, the most outstanding is the new version of the C-pillar, more vertical, inspired by the one that introduced the latest generation of Class C.

It is no coincidence that Mercedes has chosen to express its initial intentions in a version with three-body bodywork, much appreciated both in China (Concept A Sedan has made its world debut in the Shanghai Hall) and in the United States, two markets Giants for the German brand (and for any of the others).

The Concept A Sedan measures 4.57 meters in length by 1.87 in width and 1.462 in height, that is, slightly more compact than the current GLA (which measures 4.64 meters) and somewhat higher, but also almost 10 centimeters wider.