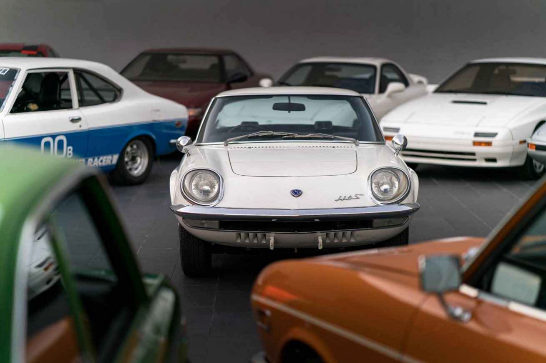 t today 50 years ago Mazda marked a before and after in the history of motorsport with the launch of the Mazda Cosmo Sport. The elegant two-seater incorporated the rotary engine, which meant the departure of a long tradition of innovation that continues today giving us fun at the wheel and success in the world of racing with a unique technology.

In 1967, the Mazda Cosmo Sport was the first car in the world powered by a two-rotor engine. It was also Mazda’s first sports car. It provided the base that has been transmitted to other vehicles as legendary as the Mazda RX-7 or the Mazda MX-5. Although only 1,176 units were made, this model was a great phenomenon so that Mazda began to be known as a unique brand, with vocation to challenge the formalisms of engineering and design.

The engineers of the Japanese company had to overcome numerous obstacles to make a rotary engine commercial and to subject the prototypes to exhaustive tests for thousands of kilometers. Dozens of companies signed license agreements with NSU to develop this new technology from this German manufacturer of cars and motorcycles, but only one of them was successful.

When Mazda was able to put the potential of the rotary engine back together to achieve performance levels comparable to those of much larger and heavier piston engines, Mazda started manufacturing nearly two million vehicles with this engine.

During the 1980s, the RX-7 dominated racing within its IMSA (International Motor Sport Association) category.

Although the most remembered victory of Mazda occurred in June of 1991 obtaining to be raised like champion of the 24 hours of Le Mans at the hands of a Mazda 787B. This vehicle was equipped with a rotary engine of 2.6 liters and four rotors.

This victory was, and remains, a milestone in the history of racing as the only time he has ever won a piston-less motor vehicle. The performance of the 787B’s R26B rotary engine responded reliably. The intelligence at the time of managing the race the trio of pilots who were Johnny Herbert, Volker Weidler and Bertransd Gachot, did the rest.

The three cars were able to finish the race. They were two new models 787B and a 787 of the previous year. They finished first, sixth and eighth in the overall and, of the 38 cars that started the race, only finished nine more. Interestingly, when the engineers examined the R26B engine at the end of the race they said it was so good that it could run another 24 hours. The

The following year, this 55 green and orange car was transferred to the Mazda Museum in Hiroshima as in 1992 changed the regulations and limited the displacement of the engines causing it to be banished to this engine of Le Mans.

The Skyactiv range of engines, chassis, bodywork and other technologies that incorporate the new Mazda models are as light and unique as the rotary engine. These engines were able to solve the inconveniences of an external compression ratio, increasing the pleasure in driving and reducing fuel consumption. This is the way the factory has to differentiate itself from its competitors.