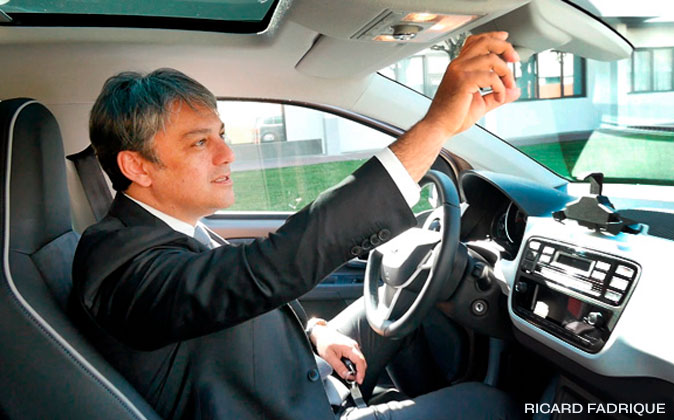 Luca de Meo: “We want to turn Seat into a Volkswagen locomotive”

Luca de Meo: “We want to turn Seat into a Volkswagen locomotive”

The President of SEAT, reviews the current situation of the company and plans for the future of SEAT.

The president of Seat, Luca de Meo (Milan, 1967), has become a lover of Barcelona, ​​a city that wants to reconnect with the brand. He expresses himself fluently in Spanish, one of the many languages ​​he speaks, and he begins to play in Catalan. De Meo, a specialist in marketing, knows Europe well and car, where he has worked in Renault, Toyota, Fiat, Audi and, since November 2015, in Seat.

Seat is chaining positive news. Is it the beginning of a new stage of a virtuous circle? I think so. It is the consequence of a work of many years in which you reach a point where everything begins to work. For about five months, we are in a new phase after recovery and we have entered a phase of growth. If nothing extraordinary happens in the market, the next few years will be positive for Seat. We are preparing the role of Seat in the next cycle. So many things will happen in the automobile sector that will change the established order. There is an opportunity for Seat to have a different role. It has always been a company that has tried to look for efficiency because it had to prove that it knew how to do things with few resources. This time, we want to turn Seat into a locomotive in some aspects of the Volkswagen consortium.

For the first time Seat would stop being the red lantern of the group and will contribute. Yes, that’s the idea. I am also working to make the group realize the contribution of Seat. We have the youngest customers in the European market, who are 8 or 10 years younger than average. In addition, out of every 10 customers, six or seven are new to the group. We are a gateway.

Attracting young people is a challenge for car manufacturers. Critics tell us that it is dangerous for us to position ourselves as a brand for young people because they do not want to buy cars. But young people sometimes have no purchasing power to buy a car and perhaps the industry has not offered attractive youth products and services. The average age of car buyers in Europe is over 50 years and we are below 40.

It is one month before the presentation of the results of Seat. Did you close 2016 with a record profit? Until September, we got the best result in the history of Seat but we must bear in mind that in the latter part of the year we had to pay the costs of the new models. 2016 was a year that closed with the same trend that had until September. It is important that the first two months of this year go well because the year is decided in the first six months. We have the launch of the new Ibiza and Arona. It is not so much the achieved level, but the continuity.

How has the launch of the Ateca, Seat’s first SUV, influenced the last months of the year? It has not influenced so much at the commercial level because we have sold 24,000 Ateca, 5% of the total, but economically, because its margin is double that of other models. It is a market that still shoots and is less competitive than other market segments. But the Ateca does not explain the whole result either. The Ibiza, for example, has lost weight in the rent a car because we have focused on profitability. We do not want volume alone. Seat is a company that is in shape after having been on a diet for the last few years. Our break-even point in results is low, around 400,000 units, by our cost structure.

SOLUTIONS TO AVOID RISK FOR EMPLOYMENT

The factory of Martorell has begun a stage of changes with the new platform of the Ibiza, the new SUV Arona and in 2018 the change of the Audi Q3 by the A1. Will there be any risk to employment from those changes? Employment is my priority. I am here to ensure prosperity for our workers and the community. For me, it would be a failure to have employment problems. We are working on it and we will have solutions. At the end of 2018 we see in the plans that there may be a slight downward swing. But the plans change, as happened with the Audi Q3, which was planned to produce 70,000 cars and in the end we have made 130,000.
The numbers of the plans are usually the minimums that assure us that an investment is possible. In the Ibiza and Arona sales will exceed forecasts and the Audi A1 will work well. If there was a risk for employment in Martorell, we would seek a solution. An example is Seat Components, with the award of a new gearbox. We had realized that without a new product, in the medium and long term we could not keep the job. That is why we have struggled with a very competitive offer to get it. Martorell will also look for solutions.

Is the production of the future large SUV of Seat in Germany important because of the contribution of that decision to the Volkswagen Group? For me it is politically important. It helps Seat play a central role, but I can not explain more details. It makes the brand more important in the group. The Q3 experience has been very good for Seat. The strategy of betting on the compact car platform in Spain, with 700,000 cars between Martorell and Navarra, will be very important also for suppliers. The investment of 4.200 million of the group in Spain is that and will have a great effect on the productive system. The success of Q3 in Martorell has forced us to raise the level of quality and now we are prepared to assume any product because we are efficient and we have competitive costs. That’s why we sell Martorell as a production platform for the group.