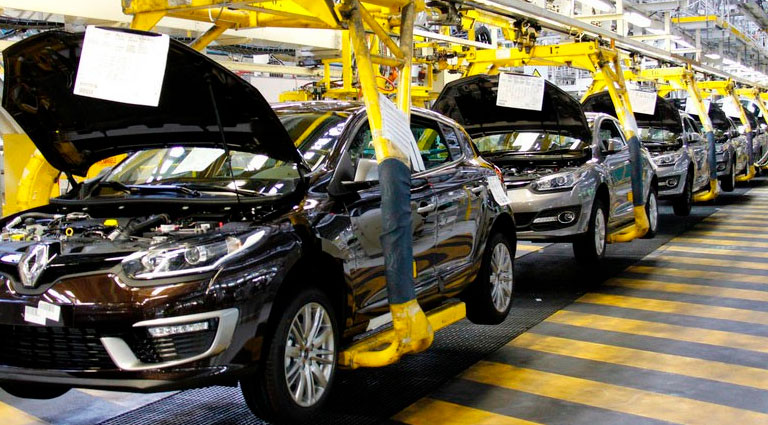 Vehicle manufacturing fell 13% in the month and 3.5% in the first half

Vehicle production in Spanish factories plunged in June due to foreign demand and new models being launched. Assemblies fell by 12.9% in the sixth month of the year, according to data provided by the Spanish association of manufacturers of vehicles Anfac, to 260,232 units.

For the year as a whole, Spanish vehicle production closed the first half of the year with 1,563,858 units manufactured. This amount also represents a decrease of 3.5% when compared to the same period last year, according to Anfac in the statement.

Exports of vehicles, meanwhile, remained stagnant compared to the first half of last year. Between January and June of this year, 1,322,042 units were sent to foreign markets, “an amount virtually identical to that of the same period last year and barely represents 0.8% less,” the officials said. However, last June, 217,166 vehicles were exported, 12.8% less than in the same month last year.
The negative figures can be explained by the decline in registrations in two of the major destination markets of Spanish vehicles in the month of June. Sales in Germany declined by 3.5% while sales in the United Kingdom fell by 5%. The third largest Spanish export market in France, France, remained stable in its registrations in June.

“The decline in registrations in some of the major foreign markets destined to vehicles manufactured in Spain would explain, in part, the decline in production figures,” said Anfac.
Specifically, leaders of the association cited, in addition to the weakness of demand in Europe, “marketing problems in countries such as Algeria or Turkey or the depreciation of the pound against the euro as a result of the approval of the exit of the Kingdom United Kingdom of Europe “as part of the difficulties for exports, and therefore of the manufacture of vehicles in Spain.
In addition, some manufacturers are immersed in model change processes which, in some cases, has even led to the total stoppage of manufacturing for the adaptation of the production lines to the technical requirements of the new models.

Before 2020, the new Seat Ibiza, Arona and Audi A1 (which replaces Q3) will arrive at the Martorell plant; The Peugeot Partner substitutes, the Citroën Berlingo and the Opel Combo to the Vigo plant of the PSA group, as well as another model that could be the replacement of the Peugeot 2008; The small sister of PSAen Villaverde (Madrid) will have a model assigned in 2020, probably the new Citroën C4 (replacing the Cactus) and the Figueruelas factory of Opel, which now belongs to PSA, will assemble the new Citroën C3 Aircross, Opel Crossland X (which replaces the Meriva), the exclusive Opel Corsa and the Adam.

The Renault plant in Valladolid is assigned a new unspecified model and the Nissan plant in Barcelona has begun to manufacture the new Renault Alaskan. Ford, Mercedes and Iveco remain stable.

Between January and May of this year, vehicles worth 16.550 million euros were exported, according to data from the Ministry of Economy, Industry and Competitiveness. The positive balance for the trade balance was 8,132 million euros, which represents a growth of 2.6% if we take as reference the same period the first five months of last year.