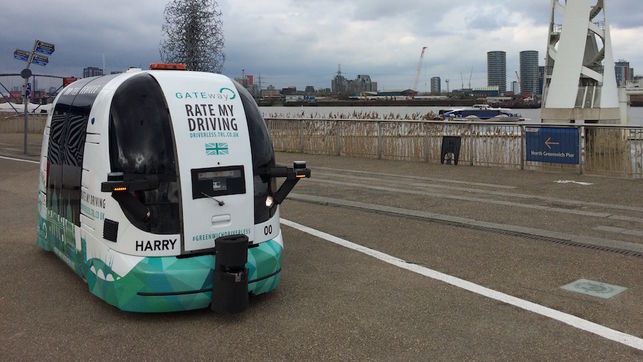 The vehicle is controlled by a computer, although on board is a person who can stop it if necessary.

It reaches speeds of up to 16 km / h and can carry up to four people.

Harry, this is what this autonomous minibus is called, has been running for free in the London borough of Greenwich, near the O2 Arena, circulating between pedestrians and cyclists.

The minibus Harry from Oxbotica.

One hundred Londoners have participated in a pilot program to test a bus without a driver, which could be introduced in London in 2019. Drivers are confident that within two years this means of transport can be used on the Greenwich peninsula and that Be implemented elsewhere.

The minibus, named Harry, runs at a speed of 16.1 km / h and is designed to stop if it detects an obstacle in its path. During the last three weeks the test has been controlled by a computer, although a qualified person has accompanied the passengers on board. Specifically, four passengers per journey.

Harry, who has neither a wheel nor a brake pedal, is powered by five cameras and three lasers that make it easy to travel along a 3.2-mile stretch of the banks of the River Thames, a walk also used by pedestrians and cyclists. The device can see up to 100 meters away, automatically braking if it detects an obstacle in its path.

Harry has been operating for free in the London borough of Greenwich, near the O2 Arena, where he has offered services within a pre-established route. Oxbotica, the company that has developed this small bus or autonomous pod, has ensured that its work still sticks to “a pedestrian environment”.

The service has been in a kind of open beta for three weeks, transporting more than 100 people, which has served to collect valuable information from passengers before this new technology. “Very few people have tried an autonomous vehicle” and Harry has allowed them “to do it,” said Oxbotica CEO Graeme Smith.

In other words, the idea is to gain public acceptance of the vehicle without a driver, in full debate inside and outside the automotive industry. In fact, Harry aims to be integrated into London’s transport network from 2019. First by trial – also in other cities – and later, by 2020, as one more route.