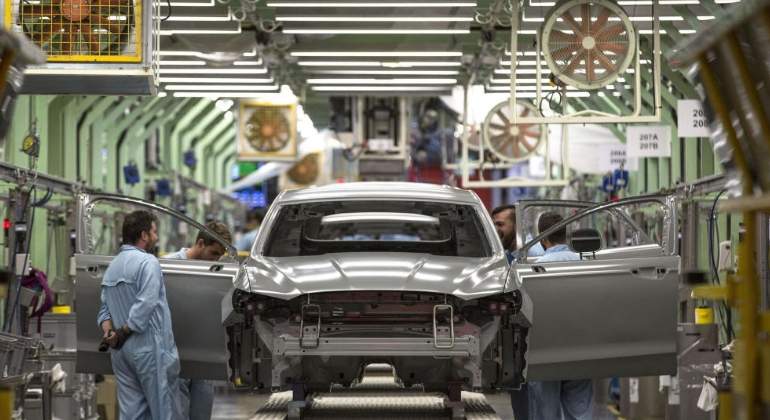 The triple threat that the automotive sector faces throughout 2020

ine braking a ship to a halt. It is a maneuver that can be performed, but whose consequences are not recommended at all. That is what has happened to the automotive sector with the arrival of the coronavirus.

The total paralysis of the sector on March 14, with the declaration of the state of alarm by the Government, is pending to verify the consequences that it will bring.

And it is that this ship is not anything light, because inside it drags 10% of the national GDP and employs 9% of the active population. Almost nothing.

When 2020 began, the ship had a fixed destination: to reduce the emissions of its vehicles by European Union regulations. This is not an easy goal if we take into account that in Spain diesel and gasoline vehicles are mainly produced.

But with its pluses and minuses it was taking place. The car companies launched new platforms for the development of electrified models. This is the case of nine of the twelve Spanish plants. Models like the Citroën Berlingo electric, Ford Mondeo hybrid, Nissan e-NV200, Opel Corsa electric, Mercedes-Benz e-Vito and Peugeot Partner are produced in Spain. Pending the resumption of activity, and with it normality, there are eight other models.

With the slowdown to which the automotive sector has been subjected, there has been a change of course, although not a goal. The goal of reducing emissions remains in place for the time being, but travel conditions are not the same.

The automobile companies have been forced to apply Temporary Employment Regulation Files (Ertes) due to force majeure. Some have already negotiated new Ertes for organizational or productive reasons, such as PSA in Figueruelas or Vigo, and others are expected to apply this formula when the Ertes of force majeure that are currently in force expire. This has been stated by the general director of the Spanish Association of Automobile and Truck Manufacturers (Anfac), José López-Tafall.

Given this situation, the European automotive manufacturers, grouped under the community employers’ association Acea, have already asked the President of the European Commission, Ursula von der Leyen, for a one-year moratorium to meet emissions targets. And it is that these regulations oblige manufacturers to ensure that the average of their cars sold in the region from 2020 does not generate more than 95 grams of CO2 per kilometer traveled.

In case of not complying with the established levels, the automobile companies could be exposed to the payment of millionaire fines, since they will have to pay 95 euros for each gram and vehicle sold that exceeds these figures. But if the moratorium is achieved, manufacturers will get time to meet EU demands, as well as more time to sell internal combustion vehicles. And is that brands get a greater profit margin to this type of motorization than to electric vehicles.

The sector asks for aid

Let’s recap: we have a ship stranded in the middle of the ocean, with almost half a million employees directly inside it, and with demands from the port authority, which complicates its arrival in port in safe conditions. Faced with this first threat, the sector faces a second: not being able to meet these obligations.

For this reason, the ship has requested crash measures, with the aim of avoiding sinking. This is what has happened with the automotive industry. The sector as a whole has asked the Government to approve a national shock plan of urgent and specific measures for the automobile sector and other vehicles, such as industrial vehicles, buses, motorcycles or mopeds.

Among the demands of these associations, a national shock plan to support the sector stands out, with measures to boost demand, which help the global recovery of the market and its services, which promote the renovation of the park with all the new technologies available. and promote compliance with the environmental objectives of the sector.

In addition, this shock plan must be complemented by measures to improve the liquidity of companies, especially those of smaller size and financial risk; fiscal measures to revive the market; measures of labor flexibility, and lastly, measures to boost investment and industry 4.0.

The associations that have promoted this crash plan have considered that this package of measures should address all relevant aspects for the industry and the automotive sector, in such a way that it is guaranteed, as far as possible within the serious crisis. that crosses Spain, competitiveness and viability.

End of the WLTP moratorium

The sector has a double threat on its back, but it is not the last. There is a third that expires on December 31. On that date, the moratorium granted by the Ministry of Industry for the application of the new WLTP emissions measurement protocol expires. With this moratorium, which was granted on August 31, 2018, the CO2 values ​​stipulated by the WLTP could be correlated with the values ​​of the extinct NEDC tests.

Thus, the Ministry of Industry allows the value correlated up to that date to be used to give a “homogeneous treatment” to vehicle taxation and “mitigate” the direct impact on the demand for cars by WLTP, as detailed by the Ministry of which it is incumbent Minister Reyes Maroto.

With this measure, the possible increases in the Registration tax are mitigated thanks to a correlation mechanism between both measurement systems. In other words: this moratorium limited the possible fall in demand that would have been produced by an increase in taxation on each new car.

But time is running out and the moratorium is drawing to an end. If the government does not apply a new moratorium, the demand for vehicles will fall, even more if we consider the consequences of the coronavirus crisis. And, according to the International Monetary Fund, Spanish GDP will fall 8% in 2020 and the unemployment rate will reach 20.8%.

In short, after overcoming the coronavirus pandemic, the automotive sector will need two things; on the one hand, incentives from the different public administrations and; on the other, time to recover from this break and comply with the different regulations on emissions. We are not talking about any ship, but the second largest in Europe and the ninth largest in the world.