Automobiles do not hesitate to reinforce the offer of this type of vehicle, which in the coming months will present more news than any other segment.
Seat, which debuted in the category a year ago, will have its trio in 2018, as they already have Nissan, Ford or Renault.

The Korean Hyundai will launch a fourth model, the smallest of all, to complete an SUV family for all needs.

Ford, Edge, EcoSport and Kuga SUVs from left to right.

With the confirmation in the last two weeks of the arrival of a small SUV in Hyundai and a large one in Seat, it can be concluded that by 2018 there will be no general brand that in its catalog does not offer less than three models of these characteristics. You know, three out of ten cars sold in Spain simulate the body of an SUV, even if TT have that: design, and little else.

The Nissan Qashqai was the precursor (2007). A compact tourism – segment C – with high suspensions and muscular shapes excited the staff and elevated it to stardom. The same Japanese brand was quick and launched a small brother-segment B- Nissan Juke (2010), and reformulated the coordinates of a larger SUV-segment D and with 7 available seats-, the Nissan X-Trail (2015). Three SUVs in one catalog.

Nissan is no longer alone in this adventure. His ally Renault has been the strategy, with three models that share components and much of the development of its Asian cousins: Captur (2013), Kadjar (2015) and new Koleos (2016).

Nissan SUVs, Juke, X-Trail and Qashqai, from left to right. 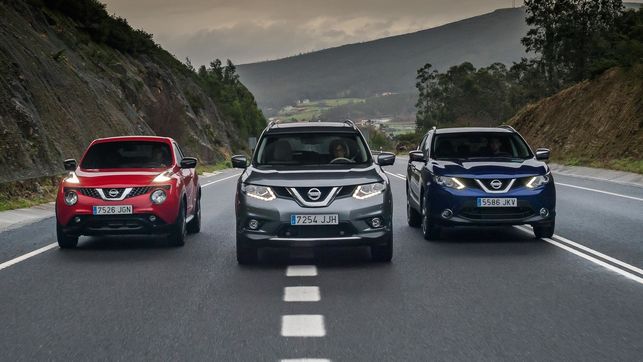 Like Renault, Opel or Ford are other generalists that manufacture in Spain, rarely they lower their sales of the Top5 and its popular cars (Corsa and Astra or Fiesta and Focus) coexist with a multiple range of SUV. In the case of the German incorporate the surname X (Crossland X, Mokka X and Grandland X-end of 2017), while the American has added a large SUV, Edge (2016), to the more measured Kuga (2008 ) And EcoSport (2013).

For its part Peugeot is combining in the latest launches design features of todocamino with functional characteristics of minivan. The urban 2008 (launched in 2013 and renovated in 2016), are joined by the new generations of 3008 and 5008. Both maintain housing solutions of the best family models – the second of 7 places – but add that spicy aesthetic of SUVs Be cataloged as crossover.

The Spanish Seat will join this fervor, having been the laziest among their peers. The Ateca made itself wait, but at last the mark of Martorell illuminated (2016) a rival of height for the Qashqai. In the last section of 2017 will land a mini Ateca, named Arona and based on the platform of the last Ibiza. And for 2018 has confirmed the production of a Primo de Zumosol for both, a SUV of 4.70 meters and 7 places that shares DNA with the Skoda Kodiaq.

Some of the generalist firms that have more time with two models in their range has been Volkswagen. The big model, Touareg (2005), and the medium, Tiguan (2007), have made him live back to the reality of markets such as Spanish, where more compact (and economic) bodies receive a better reception. That space, now occupied by the Juke, Captur and company, will also cover a new small SUV, the T-ROC (2018).

The SUVs of Renault, Captur, Kadjar and Koleos, from left to right.

The Korean Hyundai and Kia are no stranger to these trends. While it is true that they h 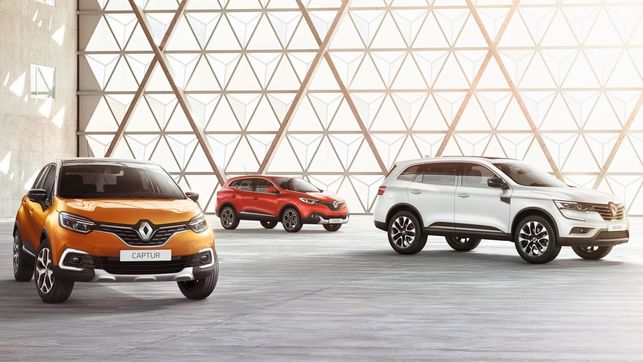 ave had to reformulate their sketches for the European market (smaller models with more efficient engines), by 2018 they will presume, no longer a trio, but an SUV poker. Recently the first reported the name of its new SUV-B, Kona, which will be the smallest of a consolidated range with Tucson, Santa Fe and Grand Santa Fe; And the second, will do the same with a model that will share development with that and will join Niro, Sportage and Sorento.

The rest of Asians are more restrained, though not for long. Mitsubishi is the best example. With Outlander (2001) and ASX (2011) at full capacity, has just presented in Geneva an intermediate model, Eclipse Cross (late 2017). Toyota has launched the C-HR hybrid crossover (2017), staying below the RAV4 (the Land Cruiser is a pure TT) and matches two models to other compatriots: Mazda (CX-3 and CX-5), Honda -V and CR-V) and Subaru (XV and Forester).