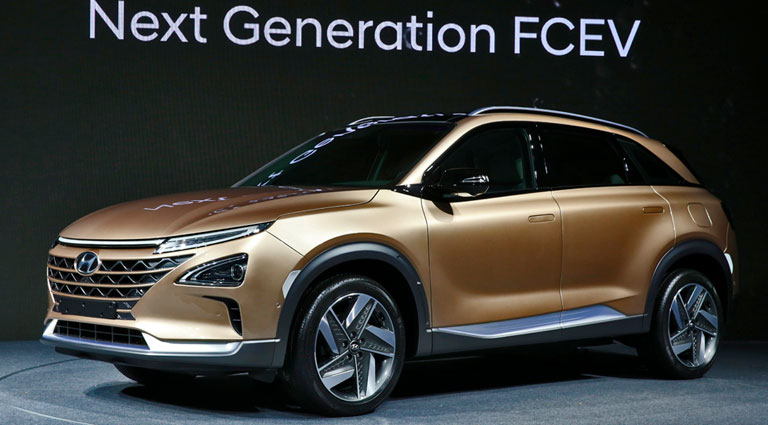 It increases the power of the engine to 168 horses and the autonomy to the 580 km.

Nearly two decades after its fuel cell technology research began and four years since it began marketing vehicles with this development, Hyundai has unveiled the hallmarks of its new generation of SUV, defined by the brand as ” quintessence of the ecological vehicle of the future “. And three are the main axes in which it rotates: greater autonomy, performance and durability.

This model improves performance compared to its predecessor, the ix35 Fuel Cell: thus, it reaches an efficiency level of 60% (compared to 55.3% of its older brother), which translates into a range of 580 km with a single deposit.

Also, the power has increased by 20%, up to 163 horses. This adds to its ease of cold start (up to 30 degrees below zero, ensure from the mark). The greater durability is another of the maximized aspects, in addition to storage, passing from two to three hydrogen tanks.

This announcement of the Korean factory is ahead in time to the launch of its new hydrogen SUV, announced for 2018. Failing to name it (its name will be announced at the Consumer Electronics Show in Las Vegas), the Asian label presented in Seoul a vehicle with an attractive design, which has put great hopes.

In fact, this model is part of the low emission policy that the factory has been practicing in recent years, and with which it intends to launch 31 ecological models (between Hyundai Motor and Kia Motors) in 2020 with variants of electric motorization, hybrid and of fuel cell. One of the company’s recent milestones, driving this concept of motorization to 18 countries, was to beat the speed record of a hydrogen-powered car in 2015, with 152.24 km / h by the ix35.

Beyond its green concept, Hyundai has taken care of the aesthetics of this new saga. Based on FE Concept lines, it aims at a blend of avant-garde and nature, in clear allusion to its zero emissions purpose. It emphasizes the extension of the front lights and the handles of the doors to the same level of the body, maximizing the aerodynamics.

In its interior predominate the softer tones, in contrast with its exterior. It emphasizes the high central console and the use of biological materials, which has been worth to him to obtain the ecological certification.

Hyundai has also remarked its next steps on this green path. At the end of the year, it will introduce a hydrogen bus and, in the first half of 2018, will launch the electric version of the compact Kona SUV, with 390 km of autonomy. In 2021, it will be the turn of the electric version of Genesis (its luxury division) and after that date the commissioning of a long-distance tram with 500 km of autonomy.