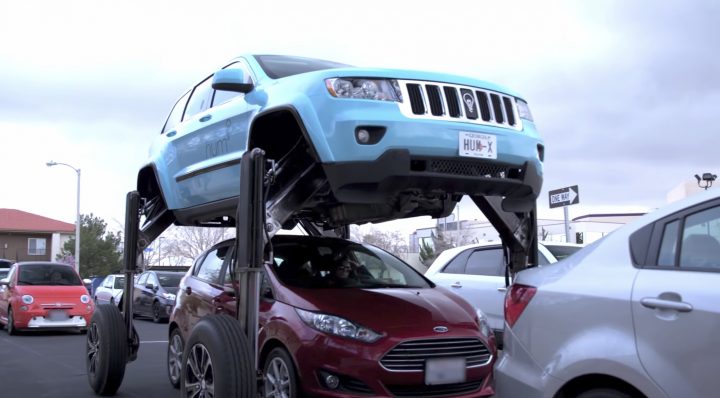 Hum Rider: an SUV three meters above the ground

It is a Jeep Grand Cherokee with a different body that, thanks to its hydraulic system, allows it to rise to avoid jams.

One of the things that most annoys us at the wheel is, without a doubt, a traffic jam. Miles of desperation and impatience that almost always translate into being late to our destination.

If we just told them the story of the Chinese ‘anti-fascist’ bus that was finally abandoned in a hangar today it’s about something truly revolutionary: the Hum Rider.

This is a Jeep Grand Cherokee, although its body has nothing to do with it. At the push of a button we can make this SUV raise that body and widen the base of its wheels to literally pass over other cars avoiding any traffic jam.

It has a weight of 3,855 kilograms, 1,400 more than the conventional Jeep. This rise is due to the installation of the hydraulic system with which the car rises almost 3 meters above the ground thanks to the 92 hydraulic lines with which it counts. Under the body is a Honda engine that works as a generator providing power to the hydraulic system and causing the car to raise or lower by just pressing the button. The standard wheels have been replaced with truck tires. In addition, for security, there are four cameras that provide a live signal that we can see through the screen located inside the car and give us the information to know exactly if there is enough space to pass And thus not to damage the vehicle.

Unfortunately, we will never see the Hum Rider on the road because it is part of a Verizon advertising campaign, credited by Thinkmodo. The campaign was carried out with the aim of creating something different and that attracted attention, something that far far surpassed. The A2Zfx company was in charge of creating the hydraulic system and conditioning the Jeep so that it could be raised. The creators have already made it clear that this car can not be officially developed as it would be impossible to meet its costs today.