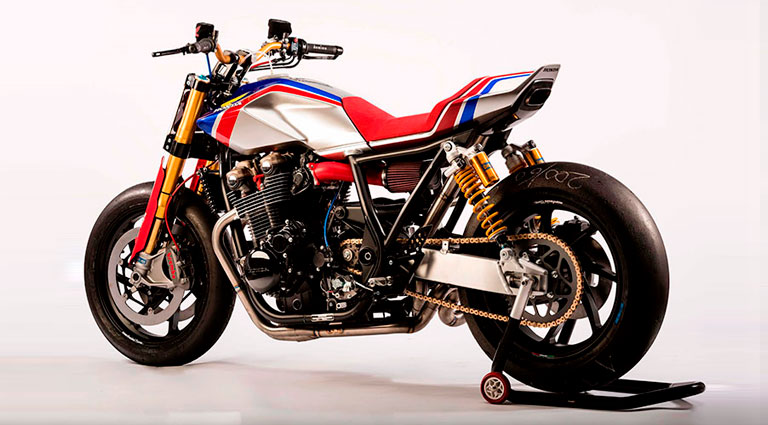 Honda will be protagonist in the “Glemseck 101”

For such a special weekend Honda has prepared four of the machines starting from series models like a CBR1000RR Fireblade SP to participate in the race Sprint International of Glemseck. It incorporates a WSB-style aluminum rear subframe and carbon fiber fairings, a longer overhang and an aluminum fuel tank derived from Honda’s race bikes in the specialty of resistance, a shorter final transmission, crankcase covers tailor made and complete Akrapovic exhaust of titanium.

Three-time World Champion Freddie Spencer will pilot the Modified Fireblade at the Sprint International 1 / 8th mile invitational race on Sunday 3 and will remember the glory days with an exhibition race alongside former rival Kevin Schwantz.

There will also be two versions of the classic neo-retro CB1100: the first is a totally black version of the current CB1100 EX made in collaboration with the South Garage trainers based in Milan. It is a dark and elegant blend of the coffee racer and bobber styles. The matt black tank, the engine, the clutch covers and the wheels in black create the general character of the bike; the semi-low handlebar, the radial brake pump and the trimmed rear end give the coffee racer touch. Details such as the miniature LED flashing lights, a new headlight and the leather seat with diamond-like upholstery, combined with the tire design, add elegance to the appeal of the CB1100 EX.

The second is the CB1100TR concept created entirely in the factory by Honda’s R & D design team, based in Rome, to express the emotions and passion of the US flat-track culture. It was developed as the ‘Queen of Flat Track Urban Circuits’ with an asphalt-oriented design, preferred by European customers, as a counterpoint to the traditional off-road image of the flat tracker for oval circuits.

Completing the four current model customizations is an ultramodern ‘urban scrambler’ version. It is based on the 500cc Rebel, suitable for A2 carnet, a model that has been very successful in Europe since its arrival this season. It is equipped with large tacho tires, oversized brake discs and a tailor-made, hand-welded lobster exhaust. His image stands out with references to the BMX culture and skateboard (with support for the skateboard located on the right) and with motocross influences.

The other four machines on display are inspired by the exceptionally rich and varied history of Honda manufacturing:

The world’s first mass-produced Superbike, the CB750 – one of the favorite long-time preparer choices – has been re-imagined as a wild naked by Billy Mackenzie, an MX1 level motocross rider who has circuits to the workshop. Its black and red version of the CB750 is designed to expose clean frame lines and the original 4-in-line air-cooled engine without interfering with the perfect proportions of the basic machine.

The CX500 – with its V twin engine transversely mounted – is another favorite among the preparers; in the Honda stand there will be two CX500 made by Kingston Customs of Gelsenkirchen. Both have received a complete Café Racer treatment, one of them based on the well-known turbo-compressed version of this classic Honda of the late 70’s and early 80’s.

The great unknown of the group is a CB250G made by the Black Beans coach based in Munich. It is the result of a painstaking reconstruction work piece by piece of a machine that is like a ‘treasure hidden in the bottom of the garage’. New carburetors and exhaust were installed, achieving deep and intense sound, as well as new brakes, footrests and shock absorbers. The overall aesthetic is minimalist, elegant and surprising.

The eight machines are an eclectic and powerful mix of influences and personality that show the work of enthusiasts united by the desire to put their personal imprint on their Honda machines; and all in tune with the spirit of freedom and creativity that underpins the Glemseck 101 – the largest annual motorcycle event of its kind in Europe.

Glemseck 101 is a European rider event taking place in Leonberg, Germany, with tens of thousands of visitors, guests and participants representing the whole motorcycle scene and living the ‘Spirit of 101’ for three full days. This year is the 12th edition.

Glemseck, in southern Germany, stands out for its motorsport tradition. Until the 1960s, legends of two- and four-wheeled sport were struggling in chilling battles at the legendary Solitude circuit around Glemseck. The Glemseck 101 is a three-day festival that seeks to preserve this tradition for a wide audience. The entrance is free for visitors during the three days, and is open to all brands and participants of any motorcycle field.

It also serves as a meeting point for designers, engineers and trainers and for their motorcycles, for international personalities, pilots and trendsetters. They are concentrated in a paddock of a mile in length that groups an ‘international community’ consisting of preparers and clubs of all Europe. This unique meeting brings together the Glemseck motorcycle history and local sponsors and dealerships, and offers attractions such as 1/8 mile sprint races and live music throughout the weekend.