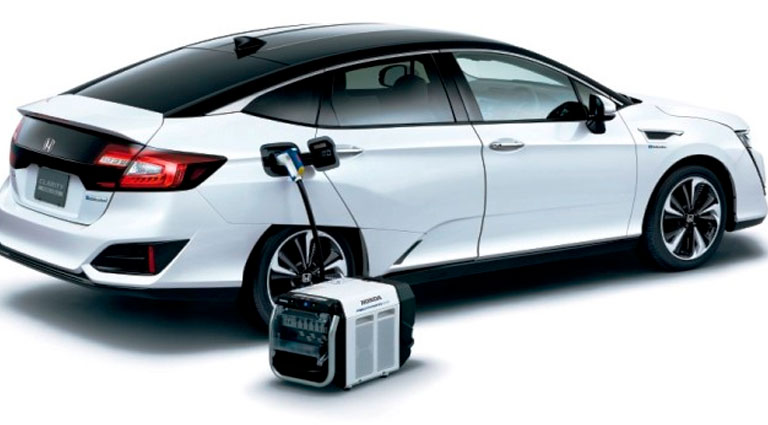 The only car in the world with three powertrains – electric, plug-in and hydrogen – on the same platform. We also tested the new hybrid engine that will implant in its European range

The technical deployment and the new electric approach that Honda is giving to its future strategy was palpable in the biannual event of the brand in its facilities of Tochigi (Japan). For example, we were able to drive two new variants of the Honda Clarity Fuel Cell, a 100% electric and a plug-in hybrid, in addition to the initial hydrogen-driven. It would almost seem that Honda was determined to start a kind of sub-brand inside the Honda itself with the Clarity label. What is certain is that it is the first vehicle in the world to have these three propulsion trains on the same platform.

In addition, and as far as we could check their controls, all three have a superb rolling quality and for their finishes, details etc, all of them could be put on the market tomorrow, as they ride even with the brand new distinctive front Coming from the new Civic. We already know that hydrogen can be “acquired” in Japan, and as for the electric there is already price for when it starts to be sold in August in the US.

That is why the brand, referring to the “three in one” model, says that “it would allow us to respond faster to the challenges of the market and infrastructures”. The quality of rolling in a short test was certainly very good and its capacity of acceleration, outstanding. Of the Fuel Cell Honda says that it has a range of 700 km, the electric that goes around 130 km and the plug-in about 70 km in electric, plus another 20 km of the combustion engine, all of which can carry five passengers.

One of the things we could try in the biannual event of Honda in which they present their improvements and works for the future was the second generation of its hybrid engine that the brand calls i-MMD and that combines a thermal engine and an electric motor To bring together the best of both worlds, also making its mechanics more compact. It is an engine that is already offered in the US in a minivan called Odissey, in addition to being presented at the Beijing Motor Show on the CR-V.

The brand affirms that it will introduce it also in its European range. This engine has only to do with those who used the Insight and Civic Hybrid already discontinued, being 23% smaller and 27% lighter than its latest generation. It has three modes of electric driving to start and move by city, Hybrid and Combustion. The Hybrid mode is characterized by being a hybrid “in series”, producing its motricity only by the electric motor while the gasoline produces the electricity for the battery. But it can also function as a hybrid “in parallel”, since in Combustion mode, the motor torque of the thermal engine can be joined that of the electric motor to produce an extra acceleration, which in total gathers 212 hp. In electric mode, the combustion engine turns freely and during braking the regeneration of the produced energy is put into operation.

To conclude, Honda also presented us its latest advances in driving dynamics. For this we climbed to a prototype that already has a very sweet and fast double clutch transmission in the gearshift, as well as a new direction that we fell in love with the smooth and smooth that we found in circuit. This direction supposedly aligns the results of a study on the way of perceiving of humans and the improvements in the technique to couple even better to our senses the advances realized in this aspect.