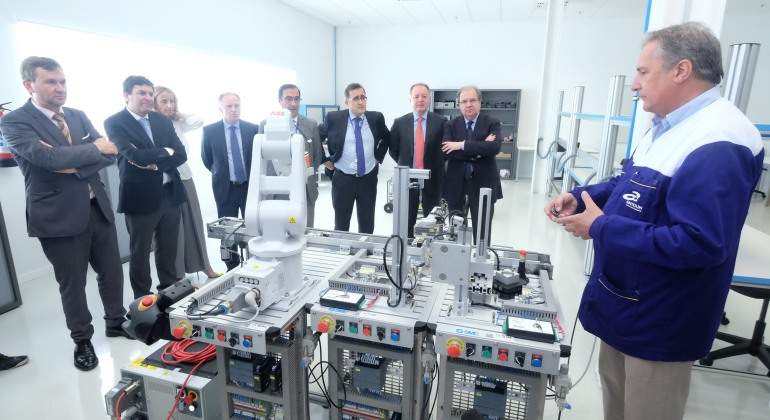 Grupo Antolin has inaugurated this Friday in Burgos its first Dual Vocational Training Center in Spain which has meant an investment of 2.5 million euros.

Pioneer in the formation of polymers in Castilla y León, the center was born with the aim of becoming a reference in the formation of Antolin Group technologies and core of the innovation of the future, contributing to the generation of qualified employment.

Antolin Group is aware that Training and Innovation are of prime importance today in the automotive interior manufacturers sector and, therefore, it makes a strong commitment to the future with the start-up of this Center with an expected capacity Of 50 students and 1,300 square meters.

This initiative is part of Antolin Group’s Human Resources and Innovation Policy, which focuses on the attraction of talent and includes various initiatives and programs linked to professional development and innovation.

The president of the company, Ernesto Antolin, the vice president, María Helena Antolin and the Minister Delgado, Jesús Pascual, attended the event, as well as the President of the Junta de Castilla y León, Juan Vicente Herrera, the Employment Counselor, Carlos Javier Fernández Carriedo and the mayor of Burgos, Francisco Javier Lacalle, among other authorities.

“As a president of Grupo Antolin, it is a great pride to continue to contribute to the positioning of Burgos and Castilla y León as centers of reference for the interior Of the automobile in the world, “said Ernesto Antolin during the inauguration.

The Dual Vocational Training Center has state-of-the-art technology, as well as all the means and resources necessary to carry out tests focused on the generation of new technologies, the study of existing ones and the improvement of those that the Group employs currently.

With a strategic location, next to the Antolin Aragusa Group – the head office of plastics injection technology – this center will complete dual language training programs and training in automation and robotics to meet the needs of an increasingly competitive sector . In addition, it has an area of ​​idealization, a space open to innovation, and that facilitates sharing, transfer and generate knowledge to propose new technological solutions.

All the Antolin Group Dual Vocational Training programs offer a contract that allows to alternate the work activity in the company with a specialized theoretical and practical training. The objective is to train highly qualified professionals prepared to work and be recognized in the automotive sector at an international level.

Globalization will mark the labor market of the future. Grupo Antolin, present in 26 countries, counts after the inauguration with two Centers of Dual Professional Formation in Europe. One in Spain and one in Germany.