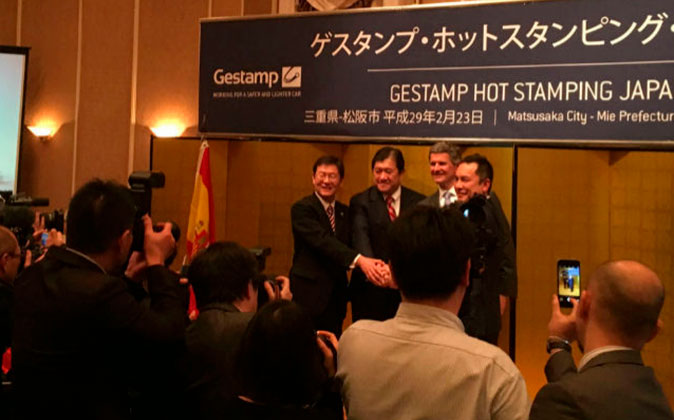 Gestamp to build a plant in Japan

The plant is expected to begin supplying components for the Japanese automotive market in the first half of 2018 and will feature the latest hot stamping technology.

Gestamp, a Spanish multinational specializing in the design, development and manufacture of components for the automotive industry, has announced the construction of its first plant in Japan at a ceremony held in the town of Matsusaka, with the participation of the prefect of Mie, Eikei Suzuki; The mayor of Matsusaka, Masato Takegami; The CEO of Mitsui, Tatsuo Yosunaga and the President of Gestamp, Francisco J. Riberas.

The new plant will be operational in the first half of 2018. It is planned that 70 people will work on it in a first phase. The number of jobs could reach 180 if the expectations of growth of the plant are met.

Gestamp Hot Stamping Japan, denomination of the new plant, will mean an initial investment of 37 million euros for the Spanish multinational company, a figure that could reach up to 65 million euros (7,500 million Japanese yen) in a second expansion. The parts manufactured in Matsusaka will go to the Japanese domestic automotive market.

The constructed area of ​​the Gestamp plant in Japan will occupy, in the two phases of its development, 15,000 square meters, on a plot of 59,000 m2. At these facilities, Gestamp will manufacture metal body components with hot stamping technology, key for lightening the vehicle’s weight.

Gestamp will join Japan with a new country to its industrial perimeter, when the new plant is now announced to open its doors in 2018, although the company already maintained an active presence in the Japanese market through technical and commercial offices that have supported Customers over the last few years.

In this sense, Gestamp president and CEO Francisco Riberas said that “Gestamp will offer, with all respect and humility, a next-generation industrial alternative that will complement the existing offer in the Japanese market today, something our customers already know by Our relationship with them in many countries. ”
A reinforcement for your strategic relationship with Japanese customers
The announcement of the new plant reflects Gestamp’s strategic vision to grow with Japanese customers, which already account for 29% of global vehicle production, as well as being a global benchmark for innovation in the automotive sector.

The importance of Japan in Gestamp’s international strategy is also demonstrated in its relationship with the Mitsui business conglomerate, which at the end of 2016 acquired 12.525% of Gestamp and which since 2013 has been a 30% shareholder in the Group’s US operations.

Francisco J. Riberas remarked that “Gestamp has bet strongly on Japan and what represents this country for the world automotive industry, both in innovation as in efficiency and quality.” “We are confident that, along with our partner Mitsui, we will continue to accompany our Japanese customers in different parts of the world, while offering them our most advanced technology in their home market,” added the Gestamp president.