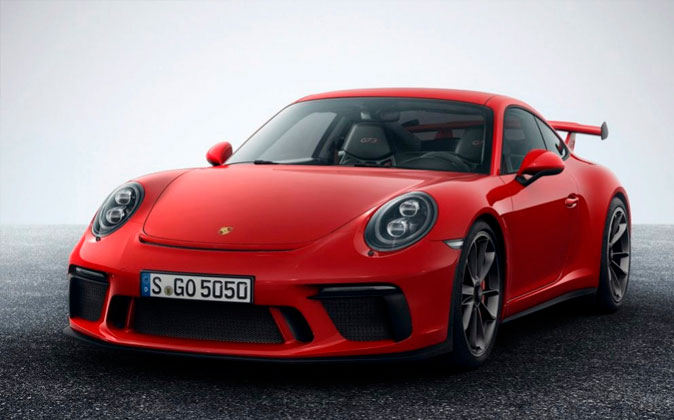 Geneva Motor Show – Porsche 911 GT3: on the back of a purebred

Porsche purists have another reason to dream of 911, which just unveiled in Geneva the new generation of its GT3 saga. The spectacular model is animated by an atmospheric 4.0-liter boxer engine capable of developing 500 hp, the same power as the latest GT3 RS and R.

In addition to the atmospheric engine (within the turbo era that has also come to Porsche), the 911 GT3 will keep the option of the six-speed manual gearbox, although the series change will be the dual-clutch PDK of seven ratios.

As a result, their benefits have improved in all areas. Now the 911 GT3 reaches 318 km / h of maximum speed, signing an acceleration from 0 to 100 km / h in just 3.4 seconds. These numbers belong to the version with PDK change, although the manual touches the 320 km / h, although it is half a second slower.

In order to adapt to this potential, a systematic construction of lightweight materials (weighing only 1,430 kg) has been chosen in order to ensure excellent performance, which also contributes to a self-directional rear axle and a driving position 25 mm lower than that of A Carrera S.

Inside, it features the 360 ​​mm steering wheel inherited from the 918 Spyder and three front seat options (no rear seats): Sport Plus adaptive seats with power adjustment, backrest with possibility of backrest regulation and rigid backs built in fiber carbon.

Of course, in order to better express its potential in circuit has the Porsche Track Precission app as standard, with which we can visualize and share the images and telemetry in an endless number of circuits in order to improve our piloting.

The Porsche 911 GT3 2017 can already be ordered in the dealerships, although the first units will not arrive to Spain until the month of May. The price in our country will be 175,437 euros.