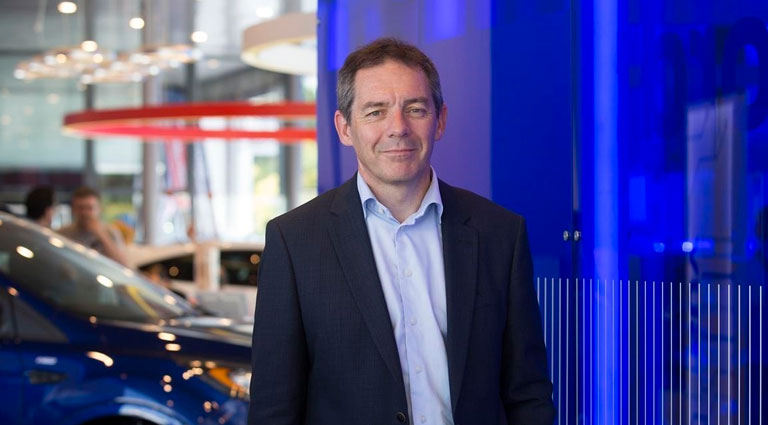 Ford not only makes cars to be bought

– He was named CEO of Ford Europe and Middle East on June 1. What are the main objectives of this new stage?

-There have also been changes in the United States, with a new CEO. Why?

-Ford has had a couple of years of great profitability globally, but time has led us to make small changes in the way we do business. Jim Hackett is the new CEO, he was already on the board. Its focus will be to accelerate the speed with which we make decisions and to change the focus a little on the business to adapt to the changing environment we are living.

-The changes were related to the low share price, or that the deadlines were not being met …

“There’s been a lot of speculation about it. I just think it was time to make some changes.

– How is brexit affecting you?

“It’s complicated for the industry at large. We have said that there will probably be a negative impact of about $ 600 million this year compared to the previous one, and a large part of this is due to exchange rates and market behavior in the UK. We are very clear in saying that a brexit pact is needed to ensure that there will be no tariffs between the UK and the European Union. We already know that the negotiations have just begun, but we do not want to end it with a situation where there are tariffs. We have adjusted our business to the conditions that are taking place, and we expect some transition agreement to soften the situation.

What are your plans for the Almussafes factory?

-We are very pleased with the development of the plant. It produces the Kuga, which is a fantastic product for us. It is one of the most complex infrastructures globally that we have for the great range of products. It has its challenges, but at the same time that implies a great flexibility in producing different segments. We have a close relationship with the plant unions, and local and regional authorities give us a lot of support. We really like our factory in Spain, it’s a great place.

– They were talking about an autonomous vehicle for collective transport in 2021.

-We have announced that our first standalone car launch will be more for commercial use. In each market will develop different, but at the moment we think of a vehicle of shared transport. It’s a business spin: Ford not only makes cars to be bought by citizens. Over time, we will be even more active in the areas of mobility where it makes sense as the consumer decides to change the way they move through cities.

-And the electric car, is it present or is it future?

-We produce the hybrid Mondeo in Spain. We are the only manufacturer of cars that we make hybrids in Spain, something of which we are very proud. We have the Electric Focus, which sells relatively few units yet. We have announced the ‘pug-in’ Hybrid Transit. We will have our first electric vehicle without combustion engine option in 2020, with a range of 300 miles. That is, many things are happening at Ford to position itself in the electric vehicle segment.

-Tesla leads innovation in electric cars and is worth more than Ford in stock market. Are you worried?

“I see Tesla as a very competent rival. They have been very disruptive, they have started from scratch and that has allowed them to do things differently, and I think they have done a great job so far. We will see how it develops over time, but we respect all competitors because each of them brings something new to the market and make us think, work harder.

“It’s too early to say what the Trump Administration is going to do, there’s nothing concrete yet. We export from Spain about 90% of production, including the United States, where Transit Connect has been a great success. We export motors and components … Our plan is to continue exporting in the same way.