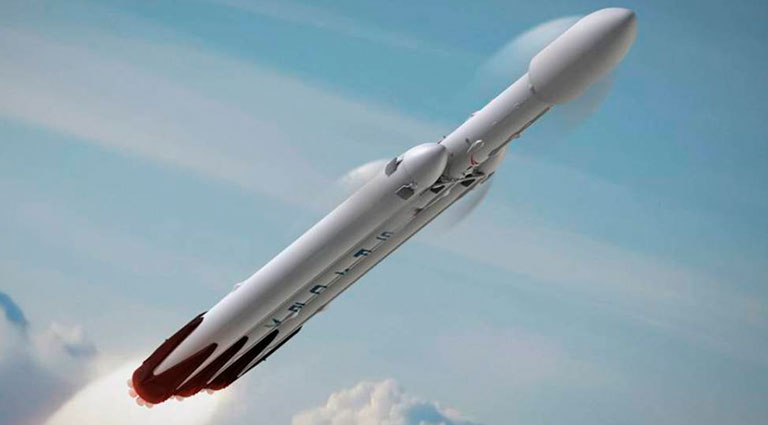 Rockets are a spectacular but extremely ineffective thing: even in the best cases the payload of a rocket does not reach 1% of its mass at launch. Therefore, to launch large loads, you have to build large rockets.

Or you can choose the path chosen by SpaceX, the company of Elon Musk, with the Falcon Heavy: to assemble a large rocket from other smaller rockets, which has a lot more economically sense than to make a big rocket for the That may not have many customers or uses.

The Falcon Heavy, which Musk has been talking about since 2005 and for which it has recently announced as the date of its first launch in November 2017, consists of a central body that is basically a reinforced Falcon 9 equipped with the necessary anchor points to hold Next to them two other Falcon 9 standard.

By throwing all three together, they add up to the power of all of them, making it the most powerful rocket in service. It will have the capacity to place loads of almost 64 tons in low earth orbit, 27 in geostationary transfer orbit, 17 to Mars, or 7 to Pluto. On another example of every day, SpaceX says that the Falcon Heavy is capable of putting a Boeing 737 loaded with all its fuel, passengers and luggage into orbit.

And just like a 737, it was designed from the beginning to meet all the safety standards required for manned flights, not in vain Musk wants to use the Falcon Heavy to send manned missions to the Moon or Mars, although for this are still many years .

Falcon 9 is the rocket that SpaceX is using for all of its recent launches, so it is more than proven, but to run synchronously three of these rockets with its 27 engines sure to complicate things.

The idea, in addition, is that, as with Falcon 9 launches, the three components of the Falcon Heavy can be reused, which makes it cheaper to launch but adds an extra degree of complexity to the subject. In fact the two side Falcon 9 of the first Falcon Heavy will be rockets that have already been used in previous releases.

So given the complexity of the task in its first launch the Falcon Heavy will not carry a load of truth but a ballast that will act as such, so that something fails and both the rocket and its load are lost.

But seeing how things are going to SpaceX with the launches and recoveries of the Falcon 9 does not seem farfetched to think that November make history again. Although Musk has plans to make a much bigger rocket, which, according to him, will allow us to establish ourselves on Mars.