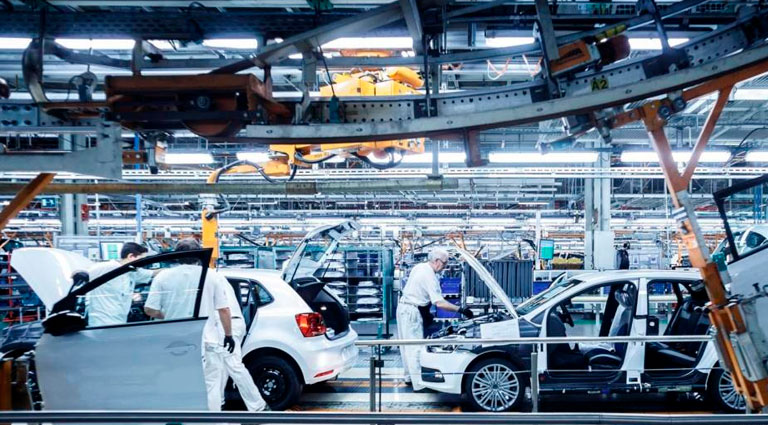 Throughout last year it invoiced 61.9 billion, manufactured almost three million vehicles and exported 84% of the units produced in Spain

The Spanish automobile industry is in good health, not only because the pace of registrations is on the constant growth path, as evidenced by last month’s sales data -131,797 units in June, which means a 6.5% With the same month of 2016, but because the sector contributes 10% to the national GDP.

The automotive industry accounted for 61.9 billion euros last year in Spain, which represents an increase of 1.7% over the previous year, according to the Annual Report 2016 of the Spanish Association of Manufacturers of Automobiles and Trucks (Anfac). If combined with sales of the component sector (34,000 million euros), the combined result of vehicles and parts reached 95.9 billion euros (compared to 92,000 million in 2015), 4.23% more.

The good industrial health of the automotive industry is also reflected in the state’s coffers, since last year this sector contributed to the Public Finance with 26,612 million euros, 3% more than the figure recorded in 2015. Vehicle manufacturing And components accounted for 8.6% of the Spanish Gross Domestic Product (GDP), one tenth less than last year, although, if added to the activities of marketing, after-sales, financial services or insurance, it rises to 10% Than in 2015).

The automotive sector is also one of the most stable and fastest growing employment niches. It is an industry that continues to generate qualified and stable work, in which 83% of its employees have an indefinite contract. In fact, 6,300 new jobs were created last year, 7.3% more than in 2015, and currently 9% of the total workforce in Spain.

The Spanish Association of Manufacturers of Automobiles and Trucks, given the trend that has shown the market last year, predicts that this 2017 closes with 1.22 million registered cars, which will mean a 6.8% more than in the previous year . To achieve this we must maintain the current pace of growth, in which companies are currently pulling their fleet renewals once the economic crisis has overcome and the recovery consolidated.

The private sector is starting to cheer up, but in a more timid way, partly because of the disappearance of Pive aid since the end of last year. For 2018, Anfac are confident that this trend will continue and reach the figure of 1.28 million vehicles sold, which will increase by 4.5%.

Production at Spanish factories until June was 1.29 million vehicles, 1.7% less than in the same period of 2016. At Anfac, they expect the second half to be better and, therefore, close with 2.9 or 3 million vehicles produced. Production has stabilized in recent months after the UK’s Brexit or the negative developments in demand in Turkey, as well as scheduled shutdowns at factories on the arrival of new models.

Exports increased last year by 7%, exceeding 2.4 million vehicles, to reach 49.4 billion euros. This enabled a trade surplus of 18.3 billion euros, 6.9% more. All these data make that Spain continues being the second European country and eighth of the world in automobile production.