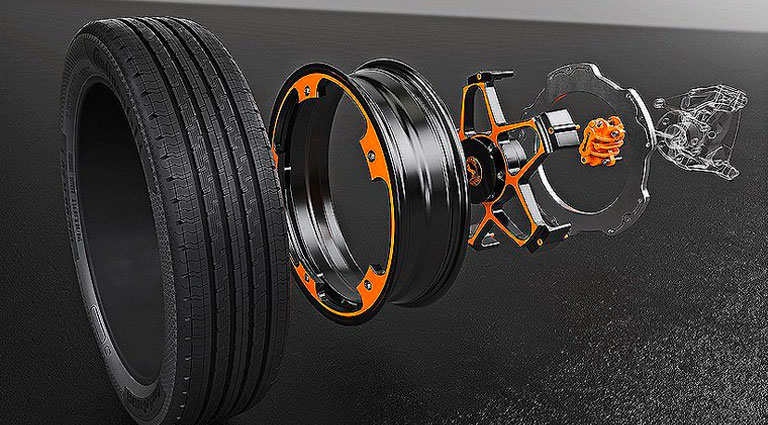 In contrast to conventional brakes, “New Wheel” attaches to the aluminum disc from the inside, allowing it to have a larger diameter and make better use of the power in the vehicle

Continental has developed an innovative concept of brakes for electric vehicles. Called ‘New Wheel‘, it aims to meet the specific requirements of these vehicles.

In contrast to conventional wheel brakes, the “New Wheel” concept consists of an aluminum disc that engages the rim from the inside. This allows it to have a particularly large diameter, which benefits the braking performance.

This system allows to increase the reach of the vehicle, thanks to the deceleration in an electric car generates electricity thanks to the recovery produced when braking with the engine. This disc, being of aluminum, also is free of corrosion, avoiding the formation of oxide.

Thanks to the lightness of the aluminum, this concept reduces the weight of the wheel and the brake, allowing the light construction in the electric cars. The advantages of the concept are much easier wheel and brake pad changes so that the disc is not subject to wear.

“In an electric car, it’s crucial that the driver spends the least possible energy on the friction brake,” says Paul Linhoff, Head of Pre-Development Brakes at Continental’s Chassis and Safety Business Unit. «During a deceleration, the moment of the vehicle is converted into electricity in the generator to increase the vehicle’s automobile.