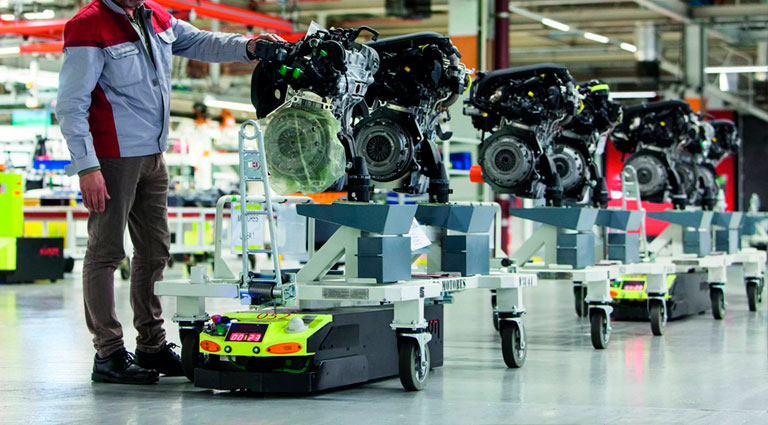 Car factories invest in ‘big data’ to save on maintenance

Car factories have spent years collecting large amounts of data through sensors distributed throughout the entire assembly line. So far, the purpose of this deployment has been limited to tracking production: how many welding points a part has received or how many components enter and exit the lines.

But lately they have taken one step further: to extract data from the inside of the robot arms that manipulate the parts to know its state and to anticipate to problems in its operation.

“If, for example, one PLC is about to fail or is consuming more energy than another on the same line, they can detect and correct it in time,” explains Jorge Pereira, CEO of Keyland. This change of orientation, from production to maintenance, “which is where the fat cost of the sector” is the most recent factories such as those of Mercedes-Benz in Vitoria or Seat in Martorell are doing in big data.

According to a study conducted by Keyland, based on interviews with more than 100 managers and middle managers from eight industries in Spain, automotive leads the implementation of digital technologies in manufacturing processes, among which the big data stands out.

In eight years, 60% of sheet metal and paint maintenance operations at Seat will be predictive

The firm, which is part of Antolin Group, attributes the primacy of the industry to its vast experience in the use of robots and a multitude of mechanisms, sensors and software connected to each other. “The 4.0 industry is built on that basis, which in automotive is very standardized and, with that little effort, the brands can launch initiatives of this type,” he maintains.

Bernardo Villazán, director of the Chair in Connected Industry at Pontifical University Comillas ICAI-Icade, recalls that the sector faces a series of very large pressures: costs, globalized competition, changes in market trends and buying habits. “In this highly competitive environment, technologies such as big data and machine learning offer opportunities unthinkable until now,” he says.

Increase operational efficiency, lower costs due to non-quality (a concept that includes expenses for returns, repairs, replacements, attention to complaints and fulfillment of guarantees), more accurately predict demand, reduce manufacturing days and Improving customer satisfaction are some of them, he says.

There are no studies on the economic impact that the big data can have on the Spanish automobile, but in the case of the US, experts from the German Fraunhofer IPA Institute estimate that the factories will save between 10% and 20% in maintenance costs Thanks to the prediction of failures from the data analysis.

Unlike banks, telecos and utilities, the car factories do not yet have enough personnel specialized in big data, which makes difficult the penetration of this technology in the sector.

“Almost all universities now offer specific degrees in data analytics, but it will still take three to four years for these youngsters to come to market,” says Jorge Pereira of Keyland.

“These profiles are highly valued because of the strong imbalance between the professionals available and the high demand of the companies,” confirms Bernardo Villazán, of the Pontificia Comillas ICAI-Icade.

Anticipating problems can also help reduce downtime, a mishap feared by the industry for its heavy losses: an average of $ 22,000 (19,600 euros) per minute, according to industrial maintenance company Advanced Technology Services ( ATS).

“We are aware of the great value that the data have to predict and anticipate any challenge,” said sources at Seat. The company has proposed that within eight years 60% of interventions related to sheet maintenance and the painting process are predictive. To achieve this, it has launched several pilot projects in the workshops of Martorell in order “to study in detail how to extract all the data that are relevant”.

PSA also has several ongoing projects. “We are in the test phase with our technological partners to optimize management and administration processes, as well as industrial and maintenance,” says a spokesman for the group’s factory in Vigo. Accurate that they are collecting information of all type: text, image, video, audio, etc. “For example, we work in geo-positioning, with data linked to flow and facilities. This will allow us to progressively digitize the factories, with all the possibilities that it offers “, abounds.

Alberto Sotomayor, director of analytics and big data of Ibermática, notes that almost all brands have among their plans to approach such processes, although many of them are still in the pilot or exploratory phase. “They are doing it in a very measured way to control the cost and see the return they can get,” he says. Ibermática has advised Mercedes-Benz in the implementation of a system of optical sensors to collect information on 700 parameters related to the quality of the painting of each of the 700 vans per day leaving the Vitoria-Gasteiz plant.

Since they are part of the supply chain, component manufacturers, especially first level ones (those who deliver the finished equipment), are also investing in big data, albeit somewhat slower due to their lower availability of resources. “Our industry is a pioneer in digitalisation as a means to produce in a faster, more flexible and competitive way and to keep us in an increasingly global market,” says Cecilia Medina, head of R & D & I at Sernauto.

The team that oversees the quality of the Ibiza, León and Audi Q3 paint in Martorell, for example, has been supplied by Eines, a Valencian company specialized in automotive engineering. After receiving the paint bath, the cars go through a led tunnel that scans the entire surface. The system takes more than 25,000 pictures of each body in just 35 seconds and processes them before they leave the station.

The advantage of this system is that the vehicle does not stop at all and uses the same internal transport lines of the plant, so that its installation requires a 50% less investment. In addition, it can be used for any new vehicle or model.

It is already possible to buy a car through Twitter

The third industry with the largest fan community, no less than 4.7 million fans, uses social networks to analyze the profile of their customers and launch specific campaigns and promotions.

In April of last year the first operation of buying and selling a car through Twitter was made. From his account, the digital marketing expert Raúl Escolano challenged the brands to sell him a seven-seat model and gasoline engine without having to step on the dealership. Up to 12 answered, and after a week of exchange of tweets the winner was announced: Nissan’s X-Trail.

The experience has not been repeated, but the sector is very active in social networks. According to a study by IAB Spain, it is the third in number of followers, with 4.7 million; The second in interactions (17% of the total), and the third in virality (13%), a concept that includes retuits and messages or photos shared by their followers.

BMW is the only industry in the top ten brands with the largest community of followers, where it occupies the 10th place, with 772,078 fans (by way of reference, the leader is El Corte Inglés with 2.1 million) .

“Both the web and social networks, but especially the latter, are basic tools to know the profile of the client and this allows to carry out actions and campaigns focused to meet their demands and aspirations,” comment Toyota sources.

A few months ago, on the occasion of the launch of the new Toyota C-HR Launch Edition, the Japanese brand offered the possibility of booking through its site one of the 200 exclusive units, filling out a simple form and making an advance of 500 euros. In addition, product experts contact interested parties on some of their models through free video calls to clarify their doubts.

Another brand, South Korean Kia, studies the behavior of visitors to its website to constantly optimize media campaigns, adapting the selection of advertising media based on objectives. Likewise, the group analyzes the profile of potential customers who show interest in their social network pages to attract new users with similar characteristics (a technique that the marketers know as look alike or similar audience).

Kia points out that, according to a study, 90% of sales of vehicles in dealerships come from users who have previously been informed on the internet, a trend with which they would be online.