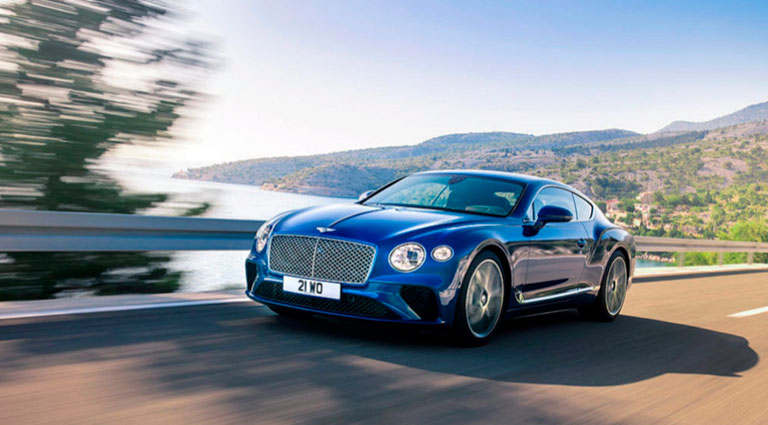 Spectacular design in a Gran Turismo body with 2 + 2 seats

Bentley will present in two weeks, within the framework of the Frankfurt Motor Show, the new Continental GT. This is the third generation of this model, an exceptional Gran Turismo of 2 + 2 seats whose launch in 2003 meant the renaissance of this brand owned by the Volkswagen Group. The price of the car, without extras, should be around 250,000 euros given that, initially, will only be sold with a W12 engine of 635 horses.

Such a figure will not push back potential customers (66,000 people bought the above), who will indeed fall prey to the spectacular design of the vehicle. Based on the Bentley EXP 10 Speed ​​6 prototype presented at the Geneva Motor Show two years ago, it is difficult to find any fault in the sculptural forms of a body that, thanks to the modern technique of its construction and the use of light materials, Is 85 kilos lighter.

The interior has been completely transformed, although there are traditions that are maintained such as the craftsmanship, the profusion of noble materials (using up to 10 square meters of wood) and the subtle details. For example, the more than 700 stitches that each of the embroidered diamonds have on the seats.

And in front of tradition, the revolution in the form of a digital instrument panel and the central screen of 12.3 inches that complements the set, somewhat in the style of the Mercedes E Class and S. And even some Volkswagen, but here What is new is that this second screen is part of a device that rotates and offers three presentations: screen (is activated automatically when starting the car), wooden cover and wooden cover with three indicators embedded: stopwatch, compass and outside temperature.

According to Bentley, the 12-cylinder block they have used for this model is the 12 most advanced cylinder in the world. It has a capacity of six liters and configuration in W, which makes it 24% shorter than a V12, maximizing the habitability and optimizing the distribution of weights.

It develops a maximum power of 635 horses and to improve its efficiency, it has a double injection system, Start & Stop, sail mode (with the engine decoupled when it can go through inertia) and disconnection of cylinders to work only with a bench of six . In the opposite extreme, it has Launch Control system to maximize the starts from stopped. In addition, for the first time, it is associated with a double clutch change and eight ratios whose response, like other parameters, is determined according to the chosen driving mode and the driver’s requirements.

And if it gets rough, it may be with too much car: the new Continental GT is capable of accelerating from 0 to 100 in only 3.7 seconds and reaches a top speed of 333 km / h. By the way, in sixth gear as the last two are to relieve the mechanics in order to reduce consumption when the rhythm and orography allow. As for the consumption, are to be confirmed, but at home say they have been reduced substantially compared to the average 14.2 liters of the previous model.

The traction, as always has been in this model and in all Bentley, is total. However, compared to the previous model with a 40/60 preset torque distribution between the front and rear axles, now, even though the propulsion is prioritized, the front wheels can get all the force they need depending on the grip. The standard tires are 21 inches and the front brakes grow up to 420 mm in diameter.

Whether as a series or as an option, the electronics come to the aid of the driver and the occupants, achieving the difficult balance of making a car fast while comfortable. The heart of the beast is the selector that allows to choose between four configurations that define the response of the mechanics and the different systems. Also, after the Bentayga, it is the second Bentley with active stabilizers that modify its hardness (more in curve, less in straight line) almost instantaneously thanks to a 48 volt electrical installation. The pneumatic suspension (with cylinders with 60% more capacity) can count on variable adjustment and the direction of electrical assistance is essential for the assemblage of different attendants to the driving, like the one of jams or the one that parks only the car.

In this regard, Bentley will offer customers two optional packages. One, more focused on urban driving with elements like keyless opening and start, signal recognition, pedestrian warning or emergency braking. And another, it is advisable to make long trips frequently that provides adaptive cruise control, projected information on the windshield or night vision system.

In any case, the personalization department of the British manufacturer will always be attentive to the wishes and extravagances of its lucky clients, whose budget will be the only limit.