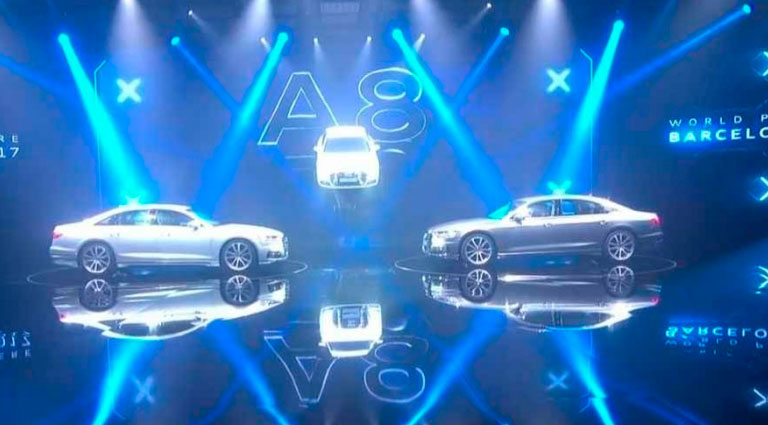 Audi shows its future more technological at the Audi Summit

He has shown before 2000 people his plans on autonomous driving and electrification, keys for sustainable mobility, the concept My Audi and has unveiled the new Audi A8

At the Audi Summit officially unveiled the new A8

The brand of the four rings has made a great display in Barcelona in this first edition of the Audi Summit to which 2,000 guests from around the world have come to know firsthand the company’s ambitious plans for the future, which go through driving Autonomous and electrical, for connectivity and for new technologies. A meeting to be held from now on every year in different cities around the world.

It has been a multitudinous encounter in which they have shown the main current vehicles of the brand, from their more sporty models or the most camperos or the most ecological or competition vehicles like the Audi Sport Quattro with which Walter Rohrl achieved important Results in the world of rallies and that marked the way of the traction to the four wheels for the rest of manufacturers.

In this event, the company’s marketing manager explained the intention of the brand of the four rings to move from being a premium car manufacturer to becoming a supplier of digital services for the car, equally within the Premium segment. The brand is therefore immersed in the largest corporate transformation of its history. The objective of the German brand is to facilitate the life of the users of their cars and for this to be offered in the coming years innovative services and solutions.

No doubt one of the keys is the autonomous driving in which Audi takes an important step forward with the new A8 officially presented at this same event in Barcelona. It is a very important vehicle that will allow a level of assistance to the driving of grade 3. This means that you can do autonomous driving in city and in jams without your driver having to put his hands on the wheel. And already prepare the next step, autonomous driving on open road, which will already assume a level 4 of autonomy.

The most advanced technology

With the arrival of this autonomous driving the brand raises a new concept such as Hour 25. In general, a person uses at most one hour a day the vehicle. The moment the autonomous car becomes a reality, the “drivers” will have that hour more freedom each day. And hence the name of Hora 25.

Audi differentiates in this additional daily hour three types of activities that can be done by a driver, to work completing reports or reviewing the accounting, or analyzing the work mails, to relax through a movie or other activity such as reading or videoconferencing with a Friend or relative or planning a trip and a third option that is simply to rest.

Another highlight at Audi Summit has been the announcement of the launch of My Audi, which will be the ecosystem that will connect our vehicle with the environment and with other users. This system will become the basis of new on-demand services to be launched by the company in the near future. It is a concept in which everything that points to the future of mobility will be accommodated.

Of course, another highlight in this event was sustainable mobility. For this the brand bets on the e-tron range powered by both pure electric vehicles and hybrids and plug-in hybrids that will be coming soon. And also by the g-tronic range that allows the use of natural gas as fuel, which allows drastically reduce CO2 emissions. .

New Audi A8, the protagonist

The other aspect that has highlighted Audi has been the implementation of what has called the Audi AI concept, which covers the different intelligent systems and assistance to the driving that incorporates the vehicle and that will employ in the future. This concept is already included in the new A8 and will later be extended in 2019, when the company plans to launch its first 100% electric vehicle. A model whose prototype has shown the mark at this Audi Summit.

Rupert Stadler, president of the company, highlighted in his intervention the strong offensive of launching new models in which the brand is immersed at the moment. And after the Audi A8, which will hit the market after its presentation at the Frankfurt Motor Show in September, many new features will arrive. Among them, the new A6 and A7, in addition to the new Q3 todocamino, the successor to the Audi A1 that will be manufactured at the Seat plant in Barcelona, ​​in addition to the e-tron, which will all arrive during 2018 and early 2019 .