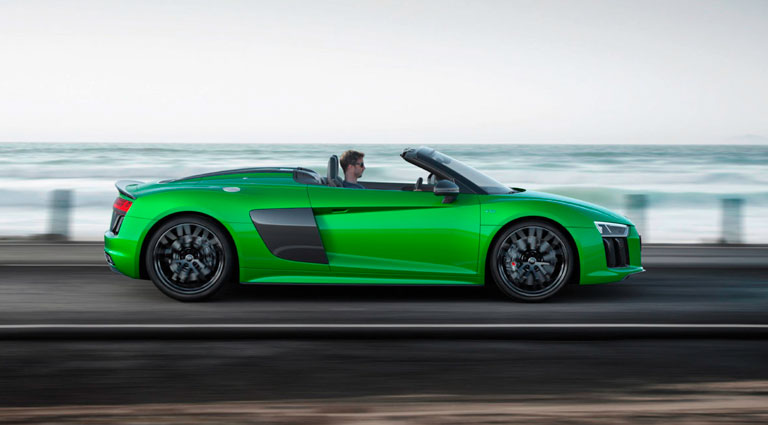 There are vehicles that are born to show that a brand is capable of surpassing itself. This is the case of the Audi R8 Spyder V10 Plus, an even more powerful decline of an Audi R8 Spyder V10 that had already left everyone frozen with their 540 horsepower and top speed of 318 km / h. The ‘Plus’ increases the figure to 610 and devours the 0 to 100 in 3.3 seconds (0.3 less) with a tip of 328 km / h.

Thus, a convertible equals the coupe, also holder of 610 horses. The ‘fault’ of these variables is the atmospheric 5.2 FSI engine, with a torque of 560 Nm at 6,500 rpm. This heart raises the R8 Spyder V10 Plus on the podium of the convertibles of the brand of four rings: there is no other so fast.

The quattro all-wheel drive system sends the entire torque to a single axle. With Audi drive select you can choose four modes: Comfort, Auto, Dynamic and Individual. The Performance, as standard, has the Dry, Wet and Snow programs to adapt the settings of the vehicle to the adhesion of the pavement. Assemble suspensions of double triangles, inspired by the competition. 19-inch aluminum wheels, with option of others of 20.

Also included in the standard equipment are the R8 baquet seats. Two Bang & Olufsen loudspeakers are integrated in each. Not to lose combo of the melodies even when the V10 goes to maximum power. For the same purpose is designed the microphone that is in the seat belt.

The images that the brand has spread correspond to the package ‘Micrommata’. The most characteristic is the green of the body, matching the seams of the interior upholstery. The canvas hood can be folded or deployed up to 50 km / h. This process takes 20 seconds. The brand has not yet revealed the price of the V8 Plus version of the R8 Spyder in Spain, but the ‘normal’ costs 209,370 euros. In Germany it would start at 207,500. The first units would arrive later this summer.