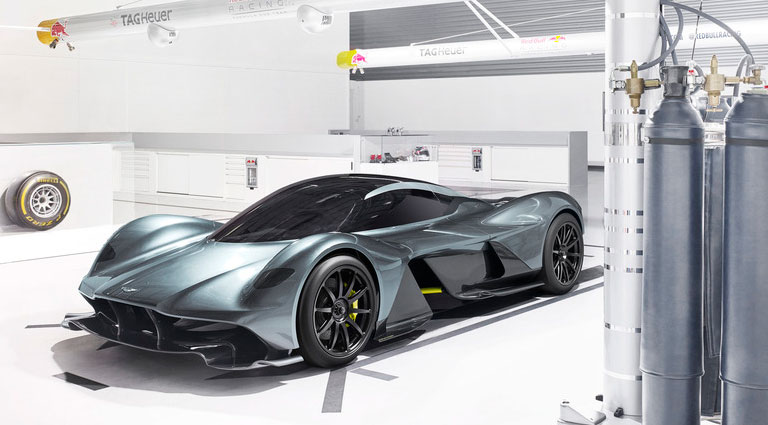 Aston Martin Valkyrie: the ‘hypercar’ of more than 1.000 CV made with Red Bull shows its (almost) definitive design

Aston Martin has released its updated Valkery, the hypercar built next to Red Bull Advanced Technologies and whose power exceeds 1,000 CV. With this redesign it improves its aerodynamic capacities and it shows a higher body and next to the production version. The four keys to the supercar of Aston Martin and Red Bull.

This sensational model, formerly known as AM-RB 001, will arrive in 2019 to the market and will do so by assuming a stratospheric power: 1,145 hp obtained from its 6.5-liter V12 engine. In addition, thanks to the use of materials of great lightness that compose its monocoque chassis of carbon fiber has achieved a mass-power ratio of 1: 1; That is, one horse for every kilogram of weight, a real ‘savage’.

On the other hand, it has opted for a more aerodynamic structure, for which the front bumper has been dispensed with in favor of a large wing and side air intakes. The exterior also highlights the suppression of conventional mirrors to give way to subtle cameras that will project on the interior screen (OLED) the image that captures, thus adapting to the future.

But its exclusiveness and approach to the world of competition is also denoted within. The backetable seats anchored to the ground, its rectangular steering wheel in the purest single-seater style of Formula 1, the harnesses of four anchorages – optional of six – like safety belts, and its prominent diffuser with double outlet of escape, are its signs of identity Most relevant. Also striking are its razor doors, which open upwards and facilitate access to the passenger compartment.

There is no lack of subtle details that show the luxury of this model, such as the engraved Aston Martin aluminum logo and whose thickness is reduced to 70 microns. In other words, it is approximately 30% thinner than a human hair.

A whole set of ostentatious elements that raise the price of each unit to approximately 3 million euros, although for the moment there is no official confirmation. It is also not known if Aston Martin will include new improvements or update some feature of the car from here until 2019, when Valkery is scheduled to hit the market. In any case, it is a definitive version at 95%, as the firm has said. In fact, the 150 road units that will be manufactured have already been sold and are expected to reach another 25 to the circuit.