Antonio J. Cobo / President of ANFAC “This year we will produce more than three million cars”

“This year we will produce more than three million cars”

Antonio J. Cobo (Granada, 1957) is the President of ANFAC, the automotive boss who has piloted the success story of the sector in Spain in recent years. Its position is rotating, and in him take turns 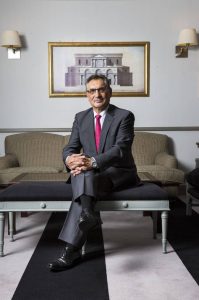 for annual periods the presidents of the manufacturers with Spanish factories. In his case, he does so as General Director of General Motors Spain and also head of the plant in Figueruelas (Zaragoza), and although his term expired on 1 January, he remains in the post, pending the appointment of his successor or Finally he is approved to extend the shifts to two years. This graduated in Physics by the University of Granada and passionate about the competitiveness, it carries all its race in General Motors, where it has occupied managerial positions in Germany and the USA. And he received with surprise the announcement of negotiations for the sale of Opel to the PSA group, although he does not think and refers to the statement sent to his employees: “Our priority is to continue to demonstrate the ability to improve day by day.”

Q. The Spanish automobile industry is reinforced by the crisis. How has it been achieved?

A. One of the keys was the conversion of Anfac in 2012. Mario Armero was appointed executive vice president and we focused on facing a critical economic situation. From there came the Three Million Plan, which was the commitment of the industry and the presidents with factories in Spain to try to recover the previous production volumes, which were almost in the middle. It required a lot of effort and personal commitment, but it showed that in a very pessimistic environment one could bring optimism. And Spain did the homework well, before other countries, and we positioned ourselves at a key moment, when the difficulties in Europe demanded to think about where to make cars profitably in the future. As our companies were prepared, we have very mature unions that have to be recognized, and there was a legal framework that allowed us to speak one by one and choose the best for each company, we gathered the wickers to do a good job.

Q. What has changed now?

A. The challenge in these four years has been to move from seeking flexibility to avoid layoffs to excess demand. I like to say that we have moved from managing misery to managing the impossible. In Figueruelas we had 2,000 more people, but we were able to maintain them with the support of the unions without much prejudice. Now we have created work for those 2,000 and more. That defines change. Between 2014 and 2015 the Spanish plants created 6,000 direct jobs, some 30,000 with indirect ones. And those of the automobile are of quality: a fixed 85%, the highest index of the industry.

Q. What has the Three Million Plan contributed?

A. The big challenge was to re-create jobs. The first reason was not only to take advantage of the industrial opportunity, but to help get Spain out of a critical situation. And it went well. Now the factories are or will be soon to levels they have not had before and we must manage unimaginable challenges in 2012, how to overcome those three million cars.

Q. But does he give them for facts?

A. Yes, definitely. In 2017 we expect to reach the figure and export close to 85%, create employment until reaching 9% of the active population, achieve 20,000 million euros of trade surplus, historical record, and exceed 38,000 euros in exports in 2016.

Q. What is the next step?

A. Now the industrial challenge is how to manufacture above installed capacity: 24 hours in five days a week. There are Saturdays and Sundays to get more out of.

Q. Where is the limit?

A. There may be 10% or 15% more potential, but three million is a good figure for Spain. Let us keep it.

Q. How can it be achieved?

A. The agreements with the unions are for five days to three shifts. It is the cap, but there is potential, although the current legal framework does not have competitive formulas to create more employment. The big challenge is to increase production, not just the weekend, but in what I call elements of ‘rationalization flexibility’ to get 100% out of the facilities.

Q. What legal framework changes do you need?

A. We ask for formulas that give us flexibility to adapt to the peaks of demand of the next years and protect us if they fall. Now we can manufacture in weekend, but the cost is higher and the average of the vehicles of the other days increases. I speak of non-temporary employment contracts, but of temporary nature, that adapt to the cycle of each model and take full advantage of the week as a normal business day. Most factories need it, and working at maximum capacity seven days is a lot of work and more people.

Q. Where is the problem?

A. “We would like to be able to make contracts linked to the life cycles of our products”

A. Today you hire 1,000 temporary people who train and pay four months until they know how to ride the car. Then you hire them for a year, but they can not be more than temporary, and you have to fire them and train another group. A year later you recover them – if they are not elsewhere – and you keep them another year to the limit of the law. And at two years, unless you expect to keep the peak of demand, you can not make them indefinite, so you pick up new people. Is that really a good work contract?

Q- What do they propose?

A- We would like to say something like this: I have a new product for five years and I want a template for that model and period, and then if it comes another one will continue with us. Our work cycles are somewhat longer than the renewal of temporary contracts and we would like to cover them with contracts per product cycle.

Q. What else can improve competitiveness?

A. There is something that we do not know if we emphasize well: this industry is global and we compete with all. Cars move from China, Korea or Mexico to Spain, and from here to the USA, etc. The cost structure must be for a global market. Labor is 10% and it is not just wages, but also flexibility. Logistics another 10% and have improved a lot. Progress has been made in the Mediterranean Corridor, but it must be completed, and longer trains and megacamions have been approved, which reduce costs. And port rates have been lowered. But much remains to be done. In addition, before the world was communicated by Northern Europe with the US, but now much comes from the East and enters the Mediterranean. Spain must communicate the ports of the East with those of the North to move merchandise between them.

Q. And the energy costs?

A. They have improved, but we have a 20% megawatt surcharge on plants of the same brand in other countries.

Q. How is absenteeism?

R. We return to the origins little by little. If we measure with the same criteria, the same industry and the same company in different countries, such as Poland or England, its average is 1.5% lower. The car in Spain is between 4% and 6%, but Germany is usually above.

Q. How is competitiveness going?

A. In recent years it has been done very well. Spain is already competitive with Poland and the Eastern countries in production costs. Not at their level, because we are not cheaper, but it allows us to compete, even with Korea. We can not relax to keep the pulse with the rest of the world

Q. What do you ask the Government?

A. Re-create incentives to rejuvenate the park and reach the potential market, which is 1.5 million. And that we prepare for the new mobility that comes and we create infrastructures of load for the electric car that put us like pioneers in its implantation.
Traductor de Google para empresas:Google Translator ToolkitTraductor de sitios webGlobal Market Finder.