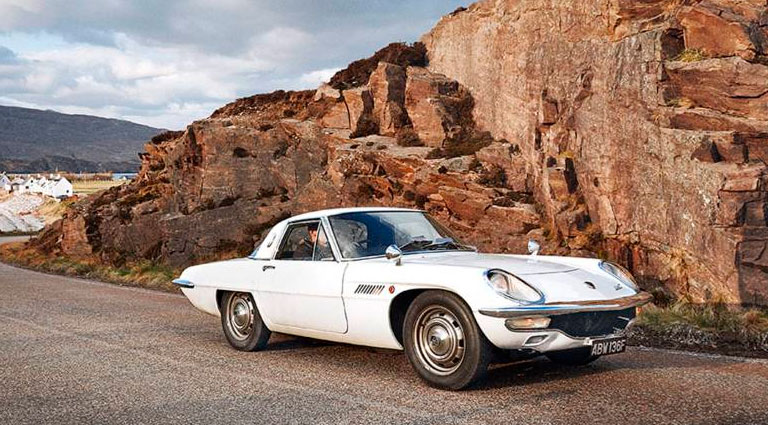 50 years of the rotary engine: the innovation that changed the automotive industry

Mazda is the only automaker that has kept this technology invented by Felix Wankel from its first model, the Cosmo of the year 1967, to the last RX-8

Throughout more than 125 years of automotive history, many innovative technologies have emerged that are looking to become an alternative to gasoline and diesel cylinder engines. The first electric motors emerged at the beginning of last century, but other alternatives like the motor of water never came to work. The one that worked for many years, and could continue to do so, is the rotary engine.

Mazda is the only automaker that has opted for years for an alternative motoring to the classic cylinder in line with its rotary engine. A type of mechanics originally designed in 1924 by Felix Wankel, a very quiet and light motor, very smooth operation, with which the Japanese brand managed to win in the mythical 24 Hours of Le Mans.

The first sketch of the rotary engine for the automobile was made by this German engineer in 1924, but it took many years for his final development. Wankel had the support of the NSU brand to finish the development and later yielded its knowledge to other companies. Several car brands were initially interested, but did not see viability. But the engineers at Mazda had already put all their interest in this new type of engine so revolutionary.

How does the rotary motor work?

The brand of Hiroshima has been the one that for 50 years has continued developing these type of motors, of which it has manufactured diverse models that it has also used in competition. The basic concept of the rotary engine is that the combustion rotates a flat disc instead of pushing the pistons up and down. For this reason, it is an interesting engine for its use in sports cars thanks to its dimensions, reduced weight and its high speed of rotation.

An example of the rotary engine.
Mazda marked a before and after in car history with the launch of its model Mazda Cosmo Sport in 1967, an elegant two-seater that incorporated a rotary engine. This was the departure from a long tradition of innovation that remains alive today: a tradition of cars that offer fun at the wheel and successes in the world of competition, with a unique technology in the market.

Only 1,176 units of that Cosmo Sport were produced, but it was a milestone for Mazda, that stopped being well-known like a manufacturer mark of industrial and utilitarian vehicles to become a unique signature. Since then, Mazda has always been characterized by challenging conventions, both in terms of engineering and design.

The arrival of the rotary engine to series production with the Mazda Cosmo was a real headache for the engineers of the Hiroshima brand, because they had to solve a myriad of technical problems that were emerging, and brought to light the pioneering spirit of the company.

Once Mazda managed to channel the potential of the rotary engine to achieve performance levels equivalent to much larger and heavier piston engines, it embarked on the manufacture of almost two million vehicles with this rotary engine. The original Cosmo of 1967 and its successors remained in production with versions with rotary engine until the end of the eighties, including a variant with turbo. But certainly the best known models equipped with rotary engines were the RX-7 and RX-8, two sports. These vehicles harnessed the full potential of a small but high performance engine.

A story attached to the sports car

The RX-7 was a revolutionary sports car launched in 1978 and in 1985 was available with a rotary engine of atmospheric Wankel cycle of 115 horses and one with turbocharger whose power rose to 165 horses. A decade later, its power was at 239 with two turbochargers and positioned like a great sportsman, but with rotary engine.

At the end of 2001, a prototype was presented as the successor to the legendary RX-7, which provided its revolving engine mechanics with a very innovative body with four doors. The RX-8 was a four-seater and four-door vehicle in which they had a somewhat special opening: the front opened forwards, while the much smaller rear opened backwards.