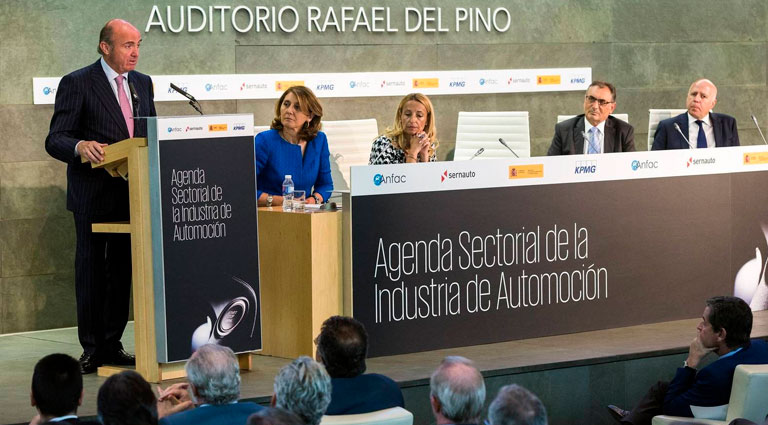 20 measures to increase the competitiveness of the automotive industry

Last year, the sector invoiced 80,000 million euros, produced 2.8 million vehicles and managed to be leader in competitiveness in Europe. But he wants more

The automotive sector introduced several weeks ago the Sectorial Agenda of the Automotive Industry, a document (you can consult it here) aimed at improving the competitiveness of Spain as a country that has been developed by the Spanish Association of Automobile and Truck Manufacturers (ANFAC) , The Spanish Association of Manufacturers of Equipment and Components for Automotive (SERNAUTO) and the KPMG consultancy, with the collaboration of the Ministry of Economy, Industry and Competitiveness. An important work in which the Spanish automotive industry is analyzed in depth and its future.

This sectoral agenda includes a roadmap with specific proposals to further strengthen the Spanish automotive industry. One of the key points of this broad work is the proposal of 20 measures designed to focus on the industry of the future through increased competitiveness. The seven priority lines of action outlined in this document are productivity and flexibility; Logistics; Taxation and financing; R & D & I; human capital; Internationalization; And regulation.

Achieving the objectives set would have a real and quantifiable impact on the Spanish economy: the activity at full capacity of the Spanish vehicle plants and automotive components would have a driving and drag effect on the entire economic fabric, being able to obtain more than 1 % Of GDP growth and create 80,000 new direct and indirect jobs.

The Spanish automotive industry has been making an extraordinary effort in a difficult transition period, and has been able to reposition itself and regain the growth path. The allocation of new models together with the market recovery has led to a turnover of vehicle manufacturers estimated at 53.7 billion euros in 2016. Also, the competitive dynamism of companies in the Spanish sector of component manufacturers has made the Sector’s turnover in 2016 at a record 34 billion euros.

Automotive and its overall vision have made it possible to create more than 38,000 direct jobs during the years of the crisis by vehicle manufacturers and components. All this thanks to maintaining flexibility and productivity. Investment in key areas for competitiveness such as innovation and digitization towards the industry has also been decisive. And it is that the automotive industry is one of the main drivers of R & D & I activity in Europe. In Spain, in 2016 the automotive equipment and components sector invested in these areas 4% of their turnover, which is three times the industrial average.

In 2016, more than 2.8 million vehicles were produced in Spain, with growth of 5.6%, practically double the European average (3%). This greater growth was due to the increase of the efficiency in the plants, the intensification of the productivity – of which Spain is leader in Europe -, and an undeniable external vocation.

The full-scale activity of vehicle and component plants can increase GDP by 1% and create 80,000 new jobs

The automotive sector contributes the most to Spain’s trade balance. With more than 2.4 million vehicles exported while about 60% of the component sector turnover comes from exports to more than 170 countries.

The importance of this sectorial agenda of the automotive industry is evident in the fact that the Minister of Economy, Luis de Guindos, in presenting this document stressed that 18 sectoral agendas are being prepared within a strategic framework of industry and that the First of them is Automotive, not by chance, but for being a strategic sector.

Only some data to focus on what the automotive industry really represents for Spain. Automotive is a strategic sector for the economy, accounting for more than 10% of the total industry. Spain is the second European car manufacturer only behind Germany, and in commercial vehicles is the first European manufacturer.

Spain currently has nine different vehicle manufacturers that are among the market leaders, in addition to a thousand components companies including some large multinationals such as Gestamp, Antolín, Ficosa or Carbures. And one last fact, the automotive industry, between the manufacturers of vehicles and those of components, invoiced more than 80,000 million euros in 2016.

But not everything is easy for the automotive industry, car sales in the European market are starting to falter: in the first half of the year sales in the EU grew by 4.7%, but in June, they only grew by one 2.1%. In that month Germany and the United Kingdom, the two most important markets of the EU, saw their sales respectively fall by 3.5 and 4.8% compared to June 2016. And these are two of the main markets for which they are destined The Spanish exports. Hence the great importance of this sectorial agenda to improve the competitiveness of Spanish industry.